The boat journey went well, although there was some swell during the latter part of the journey and for the first time ever the shower water  completely flooded the  whole shower room in the cabin. We had a nice breakfast and then collected the van and made for Tesco to fill up on provisions for the week ahead.

This is made easier by having ‘the list’ which is little modified from visit to visit. Next we parked on the quay and after visiting Tourist Information - just because we always do - and the Shetland Times bookshop just because there is always a Christmas Present to buy and give to DH to give back to me at Christmas. (This works  well as I usually forget which books I am going to receive by then, as long as he remembers where he puts them!)

We were introduced to the Dowry when we were up in the summer and loved it and it was a real treat to get one of the prize seats at the window. We knew this was unlikely when wool Week was in full flow.

From a window seat in the Dowry Normally at this point we would be ready to drive up to Unst, however we had some rather unusual things on our shopping list today. During the journey up I had arranged with one of the ladies from the Heritage Centre  in Unst that I would do an interactive demonstration of madder dyeing as I do it, whilst we were staying. I had brought the madder with me, a thermometer and some mordanted wool just in case it might go ahead. I realised that I did not have my ‘dyeing clothes’ with me and so after visiting a couple of ‘charity shops’ I had a rather tasteful shirt that only needed the buttons moved to tighten up the cuffs. I had managed to buy soda and white vinegar in Tesco. I was now searching for copper sulphate... as I had failed to get this at a garden centre on the journey. They would normally have had some but the Christmas Decorations were destined for that space..... Well I failed to get the copper sulphate but I did manage iron sulphate from the pharmacist.  The only uncertainty was the lactose coating and the still to be mastered method of crushing them. Fortunately I always carry a small balance accurate to 2 decimal places, useful for weighting rice but actually brought to measure the weight of my fine spun yarn.

We drove up to Toft and made lunch while waiting for the ferry. It was a glorious day and just two short journeys away from our favourite island, Unst. It felt as if we had not been home as it was only two and a bit months since we last waited so impatiently.

I had set myself a challenge, today was National  Spin in Public Day and I decided I would try and spin on the three ferries I would be on. I spun early on the North  Link Ferry, this is in the cabin before 5.45. I intended spinning in the lounge  having breakfast but that didn’t happen.... too much eating to do.

spinning on the ferry to Shetland 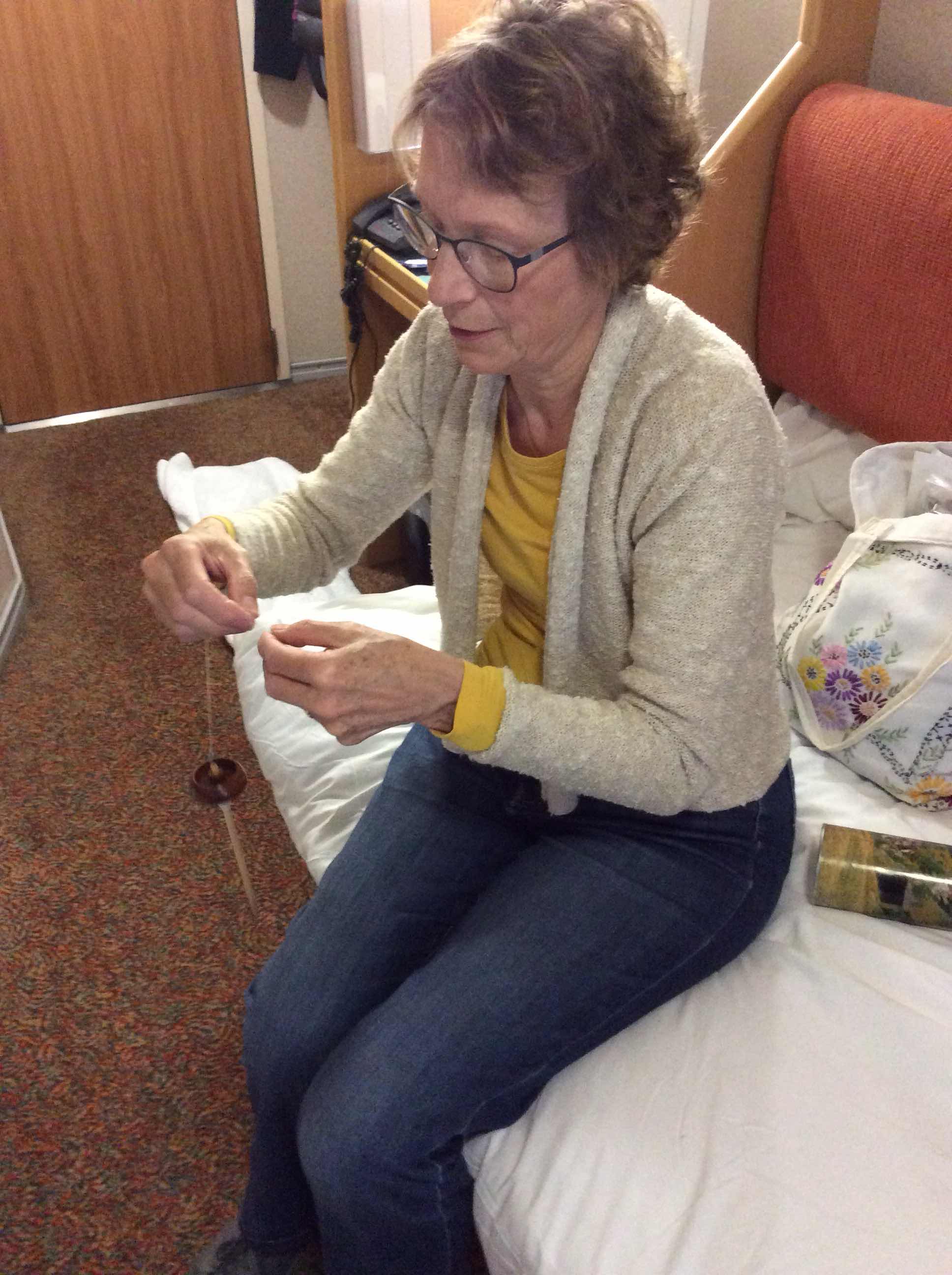 We had an uneventful crossing to Yell, enjoyed the scenery on the drive through and then there was the short hop and we would be in Unst again. We were here for a full week in which we hoped to relax, walk, look for birds, take photos, knit a bit, eat a bit, enjoy the Heritage Centre lace again and meet with the lovely knitting and spinning ladies there.

I did manage to spin on all three ferries but did not leave the comfort of the Van on the two inter island ones so it is debatable as to whether this was in public but the thought was there. If you look very carefully you can see a slightly different background on each ferry. I am spinning Norfolk Horn very fine, I worked out that it is at least 19m per g, J and S Supreme is 15m per g.

spinning on Toft to Unst ferry 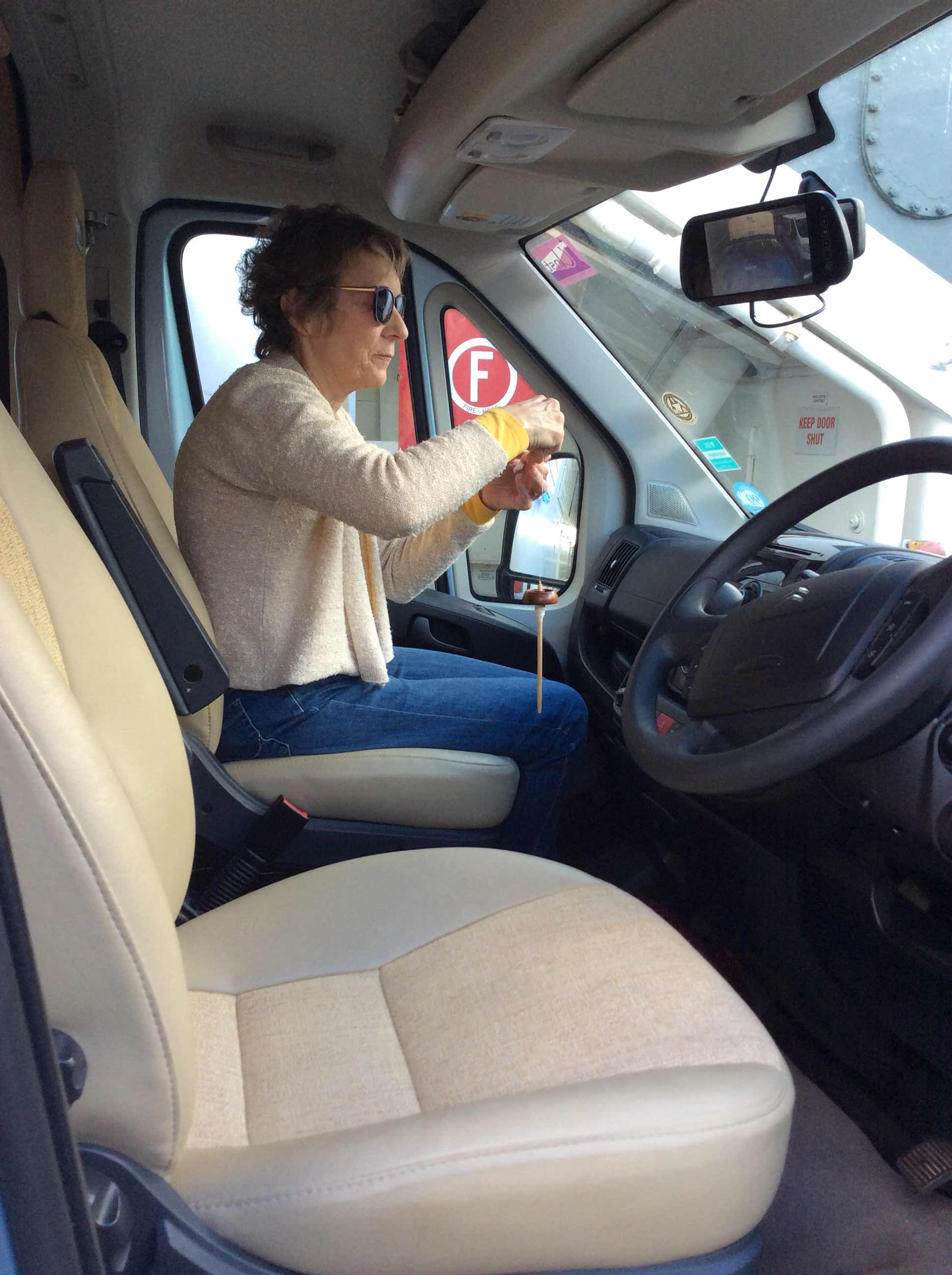 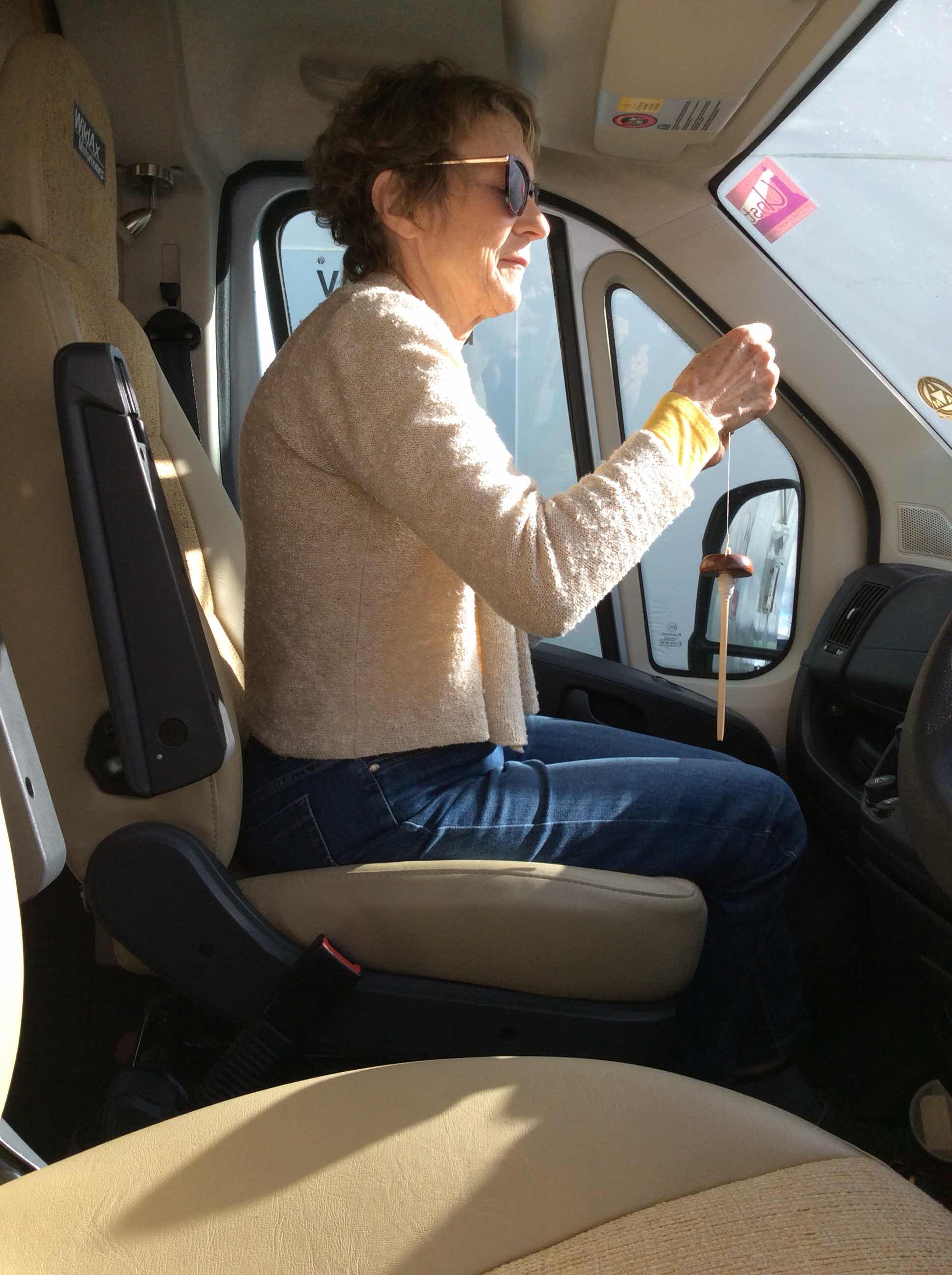 I fell into conversation with a couple of American ladies on the beach when we drinking tea, they were not going to be able to stay for Wool Week as they were off to the Hebrides. However, they had hand knitted their Mirrie Dancer hats and had naturally dyed the colours, so it was great to talk to them about natural dyeing.

We also had a redshank and heron on the beach which was going to be our view for the week.

So it felt we had finally arrived at the place we love.

Tomorrow was going to be a rest, admire the view and knit lace day.