Soon after we moved in to our current house a neighbour offered me a fleece, from the sheep he keeps on the field at the bottom of our garden. This was too good to refuse, although he noted he had sheared it himself. At that point he did not know what breed the sheep was. I washed the fleece by my favourite fermented suint method. (1)

In the late spring I dyed some  of the washed fleece with daffodil flowers and achieved ten colours. (2). I then spun each of the colours to produce yarn. The fleece was better than I thought possible from the  description by the neighbour and I was pleased with the colours I obtained.

During the following three years I chatted to the neighbour about many things, and particularly  my natural dyeing and spinning. I detected that he would very much like a knitted hat, but this needed to have a peak. He always wore a baseball sort of hat with a peak.

So I hatched a plan, which during the latter part of 2018 came to fruition.

When I was in Shetland for Wool Week 2017, I saw the knitted hats in the Shetland  Museum that were part of the Theodora Coutts collection. 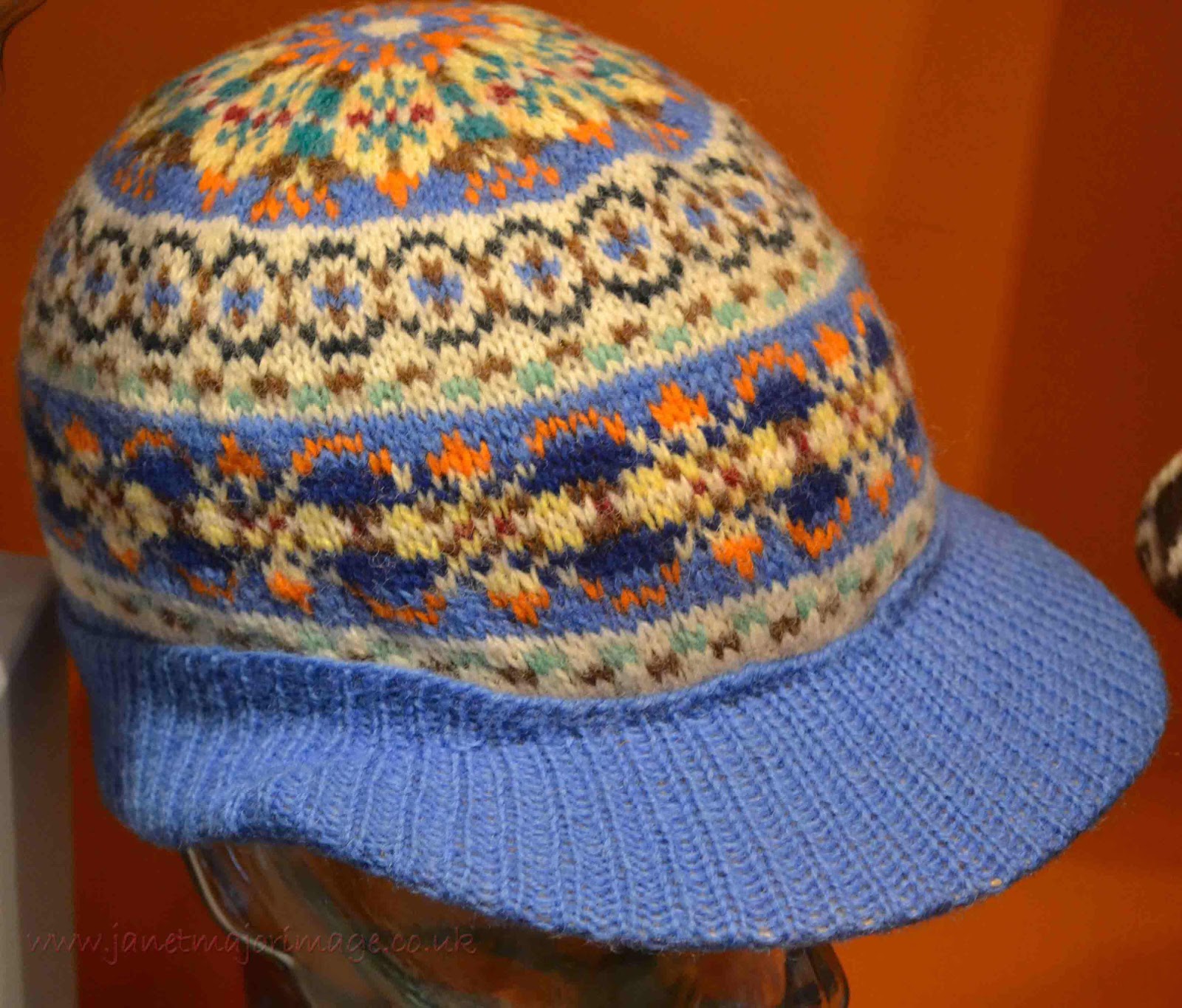 These helped my ideas for the hat. Then when I went to the Shetland Teas on the last Sunday of Wool Week I saw that Ina Irvine had such a hat on display, she had hand spun and knitted the hat and called it a Sumburgh Bonnet. I bought this hat and  talked to her about it  and she arranged to send me a pattern and helped me understand the construction of the peak.

So I now needed to spin the yarn, which I started, aiming to get close to the diameter of Shetland jumper weight yarn.

However the fun was going to be dyeing the yarn to make the hat from. I wanted the neighbour to be able to wear the hat everyday doing his ‘smallholder duties’ so my use of colour would be important, including too much natural would not be practicable.

So, the yarn was spun and I did a calculation then added a good percentage to it, compared to the Mirrie Dancers hats I knitted for Shetland Wool Week 18 (3)  so I had some ideas on  how much yarn i needed in my dye colours. I choose to dye in six  different colours which with natural made 7 colours.

So by this time it was August 18 and a friend and I were planning to dye yarn in preparation for Apple Day at Lopham and Redgrave Fen (4). Sue B was going to weave apple dyed yarn on her Saori Loom and I was going to knit more of the Secret Hat Project. For the weaving we bought Aran weight 100% Wool form the wool shop in Diss and in all dyed 200g. I would repeat this but with hand spun  yarn. We choose to use apple leaves to give us the base colour (yellow). The apple leaves were from a tree in the neighbours garden, and some of the branches draped into our garden. We had the apples identified at the Apple Day and they were named as Crispin.

The  dyed yarn for knitting. 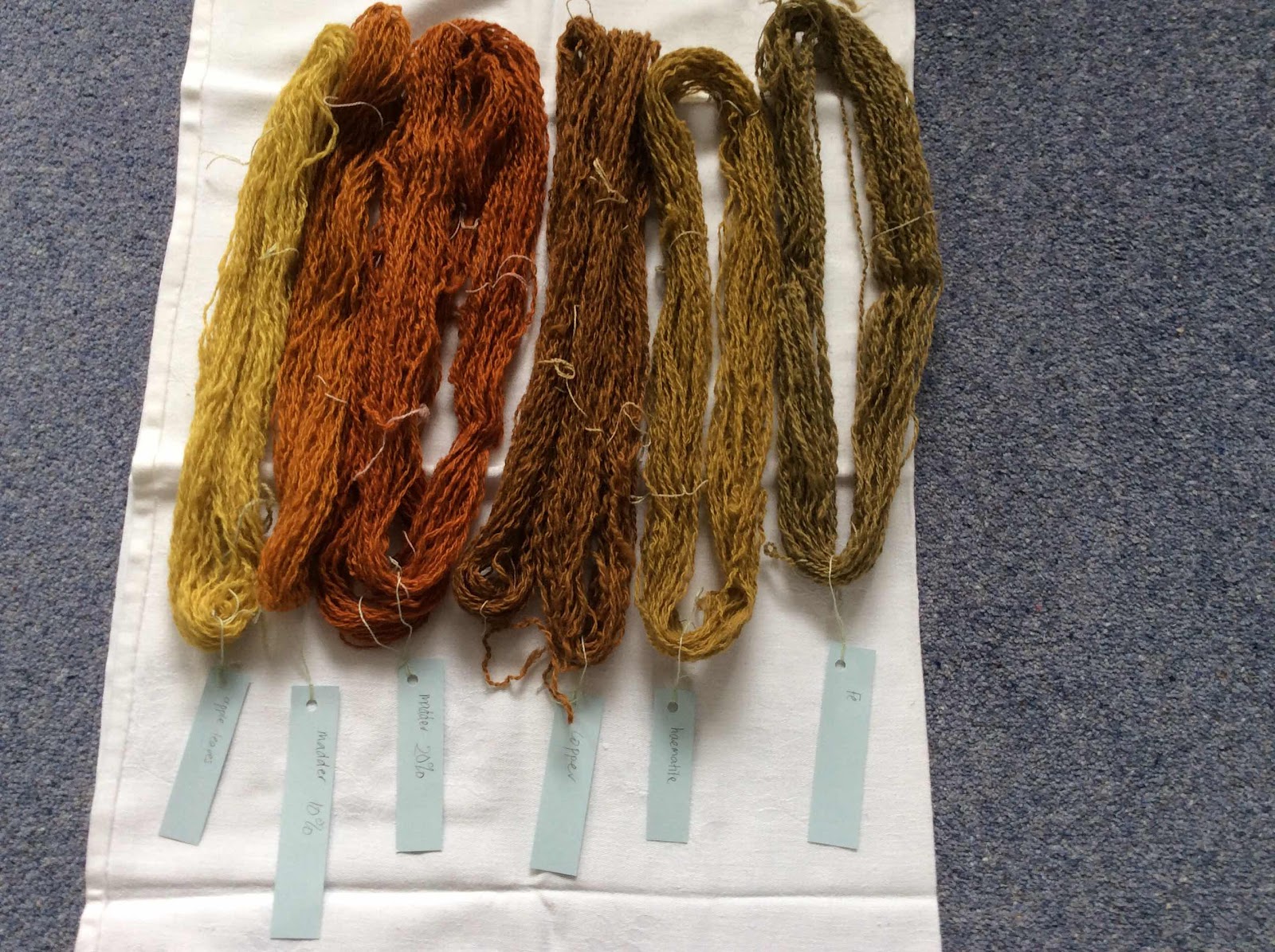 Once the yarn for the hat was dyed, samples were knitted to check the tension and hence the  size of the hat.

This took us up to September 18 when  I took the pattern with me to Shetland as my ‘easy’ knitting as opposed to my fine lace knitting project.

I would cast on in waste knitting, knit the body of the hat and then the crown and when complete would knit the ribs section downwards as I did the  Mirrie Dancers hats.  I  completed quite a bit of the body  of the hat but was not loving how the design was coming out. In my heart of hearts I knew it was not my own design.   So this was taken out and I decided to redraft the pattern to use my tried and tested favourite Fair isle design. This had the added bonus in that I could insert a row of ‘peerie’ motifs that include the owners initials- I like to do this in Fair isle knitwear that is to be worn.

As soon as I started knitting this hat again I fell in love with it.

I used the crown pattern of Ina’s hat pattern and used the colours to move through the values. I love how this part turned out.

All went well and the majority d the hat was complete. 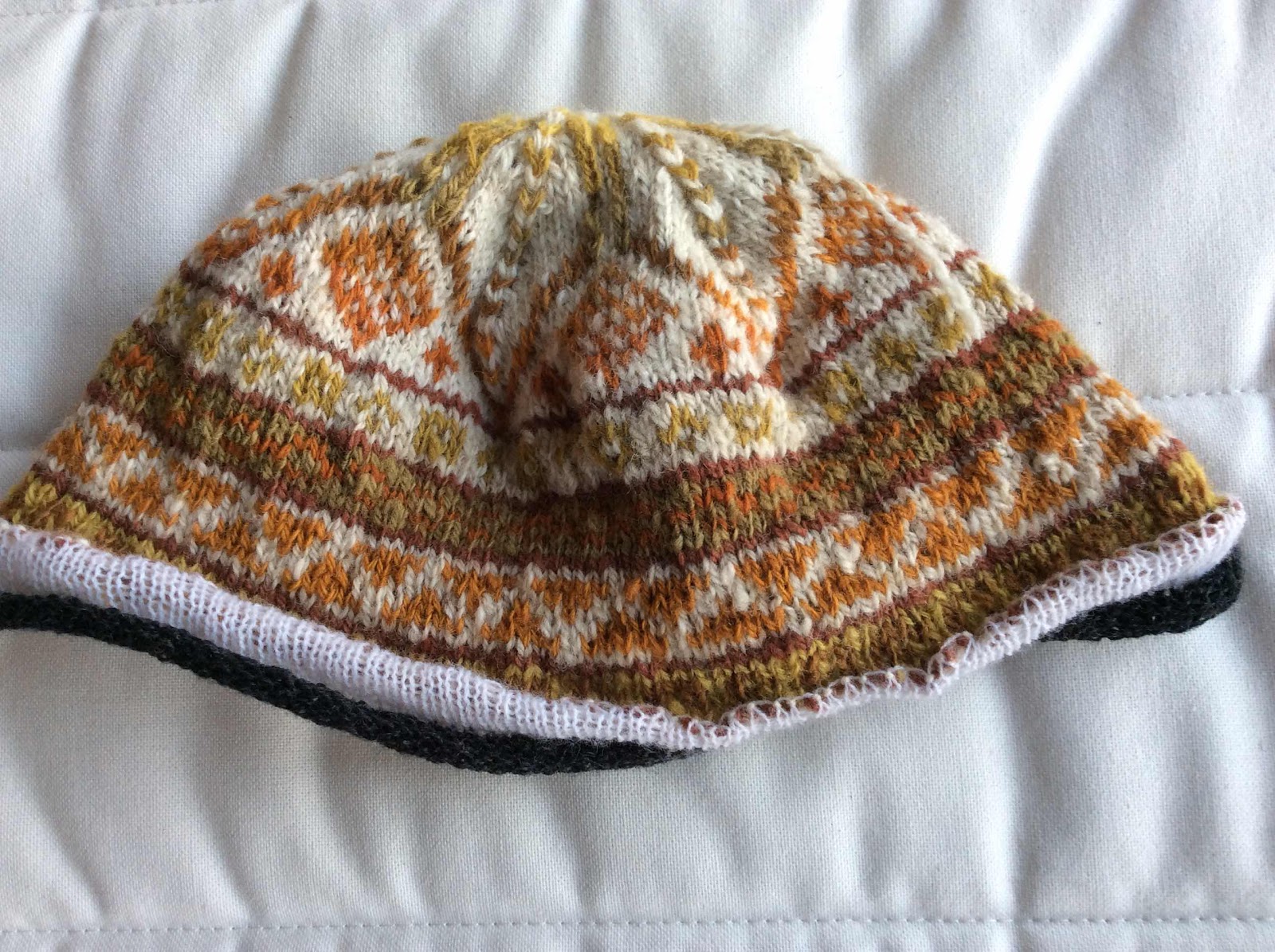 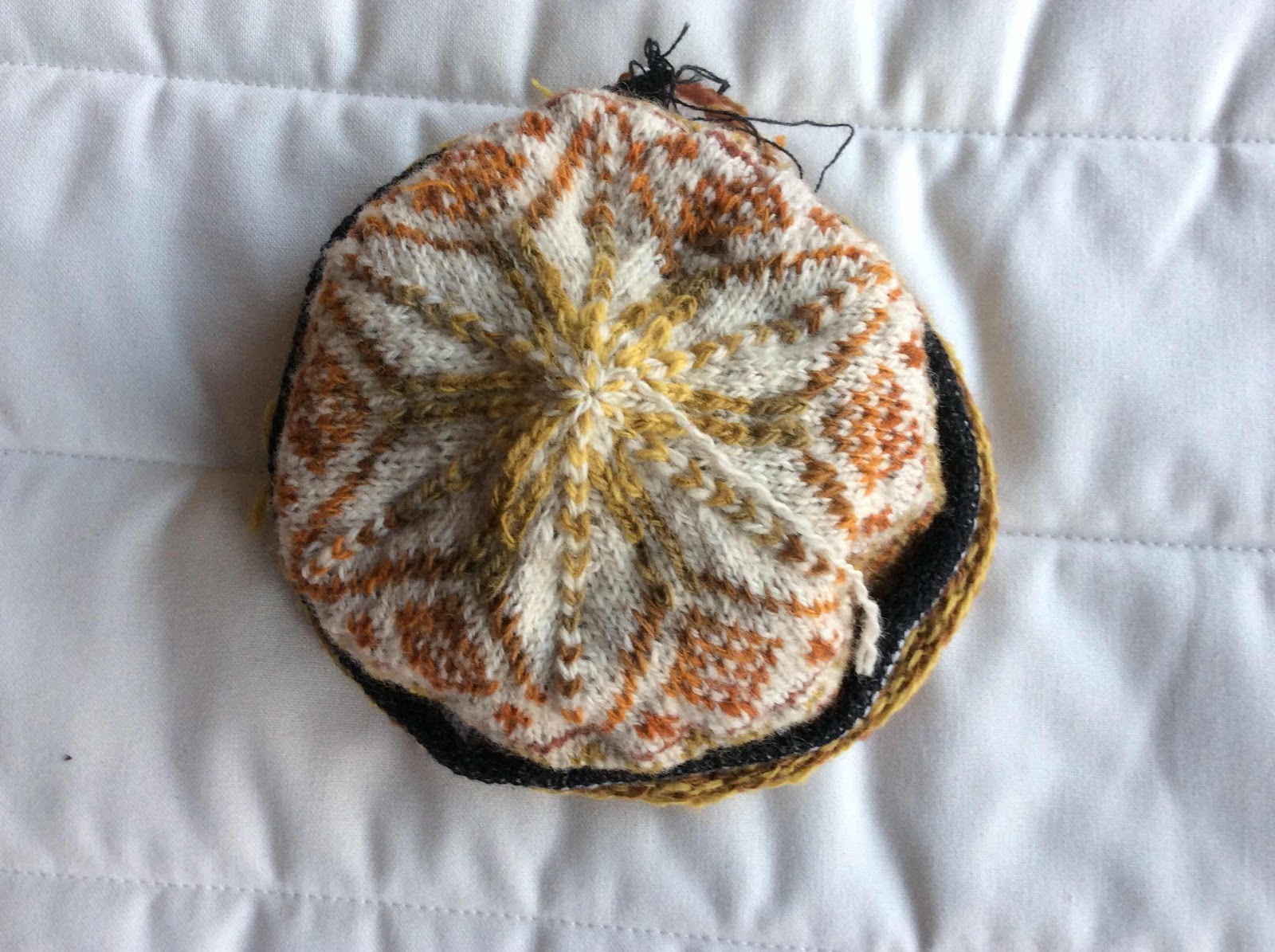 I decided to knit the rib as I had done the Mirrie Dancers pattern, downwards from my initial cast on in waste yarn. However, as I completed more of this I decided it was not going to stretch enough to stretch over the peak. It was just coming up too thick.

So there was another rethink - I would do the rib in stripes in 2x 2 rib and make what was to be the underneath of the peak mirror the top.

Eventually the knitting was complete, as I thought. 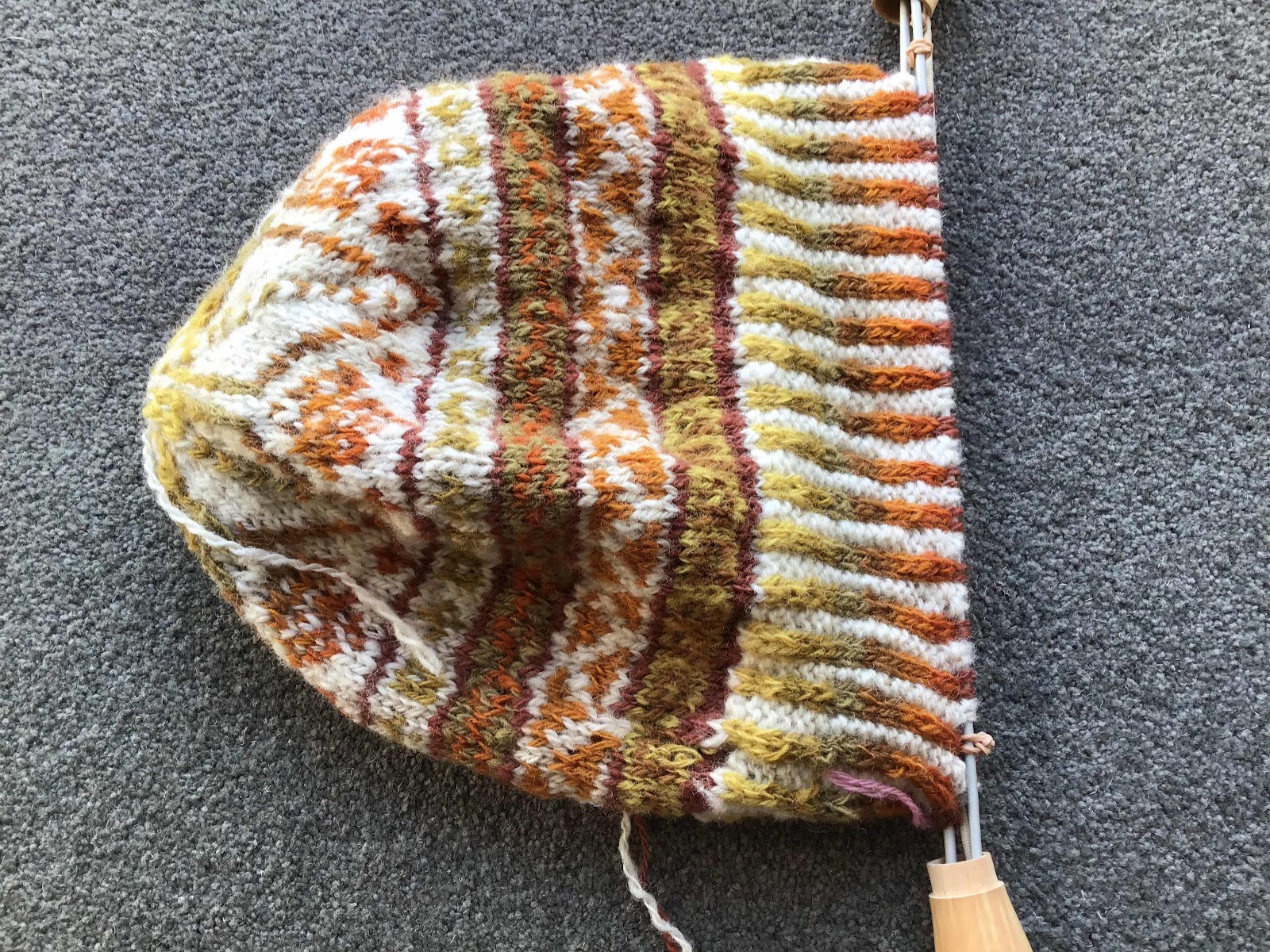 As I had knitted the hat in the round, there was very little finishing off- just ends to darn in invisibly. I try and make the inside of my garments as good as the outside. The I needed to block the hat, I used the cold blocking method over a hat former. Then it was time to insert the peak, stitch the inner ribbing in place and add an invisible anchor stitch or two to ensure the peak stayed at the front of the hat. As I inserted the peak I realised the rib was far too thick. I was not happy with it.

A third major rethink was needed. I would dye some more yarn and just use one colour, this would reduce the thickness considerably. So I dyed more yarn. I tried logwood to give me grey. However, I did not like how this went with the predominant browns of the hat, so I gave up in this and dyed some fresh yarn with madder and iron which gave a colour I was happy with.

Eventually the hat was finished. 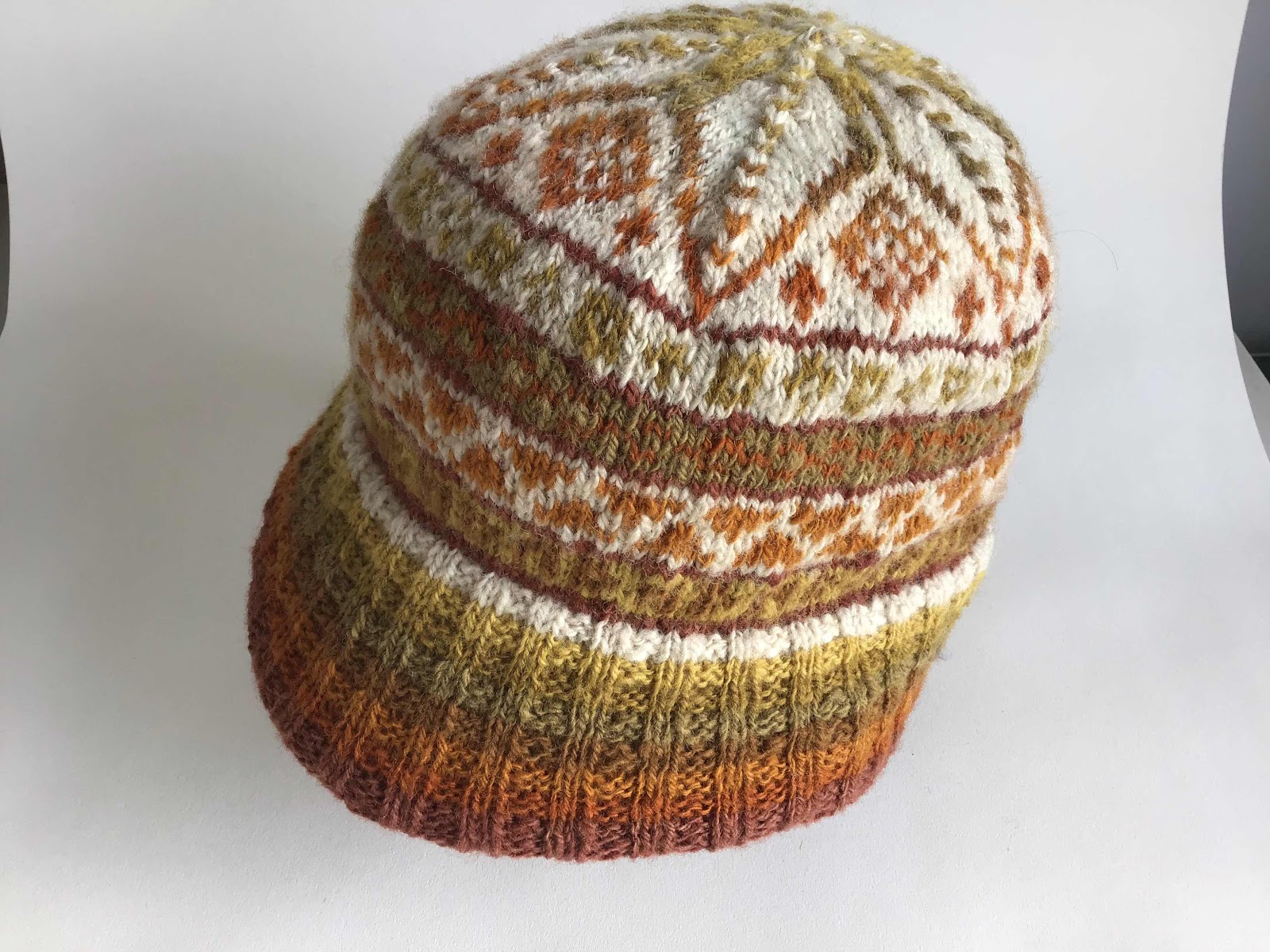 This has been a fun project and It will be going to its rightful home , the owner of the sheep (5) and the owner of the dyes for the colouring. It was a great pleasure to produce this unique hat from materials so close to my home.

I managed to arrange so the hat was just another present under the Christmas Tree for my neighbour.

I was aware I had based the hat on the head size of my husband and included a note with the hat, explaining its history and saying if it was too big or too small I could fix it.

Chatting after Christmas the neighbour was clearly delighted with the hat and it had been quite a talking point  with his family over a Christmas. However, there was a ‘but’! It was too big. Eventually after many weeks I managed to extract the hat from the neighbour and got him to try it on. It was much, much too big in diameter and height. This was entirely my fault for not finding out his had size first. (how would it then have been a secret?).

When I got this indoors I realised that I could not shrink it and there was only one thing to do, take it out and knit it again. I am very particular about finishing off my knitwear and aim to have it as good on the inside as the outside. So eventually I found all the ends and took out the yarn, re skeined  it, washed and re balled it again ready for knitting. This time I knew if it fitted me it would fit the neighbour. I decided to remove one complete set of patterning, 24 stitches and one of the sets of peerie patterns. One of the points  of the crown star was removed  too. I was surprised how easy the knitting was. I decided I needed a smaller peak too so had to recut a new peak former.

So these are the pictures of the second finished hat. 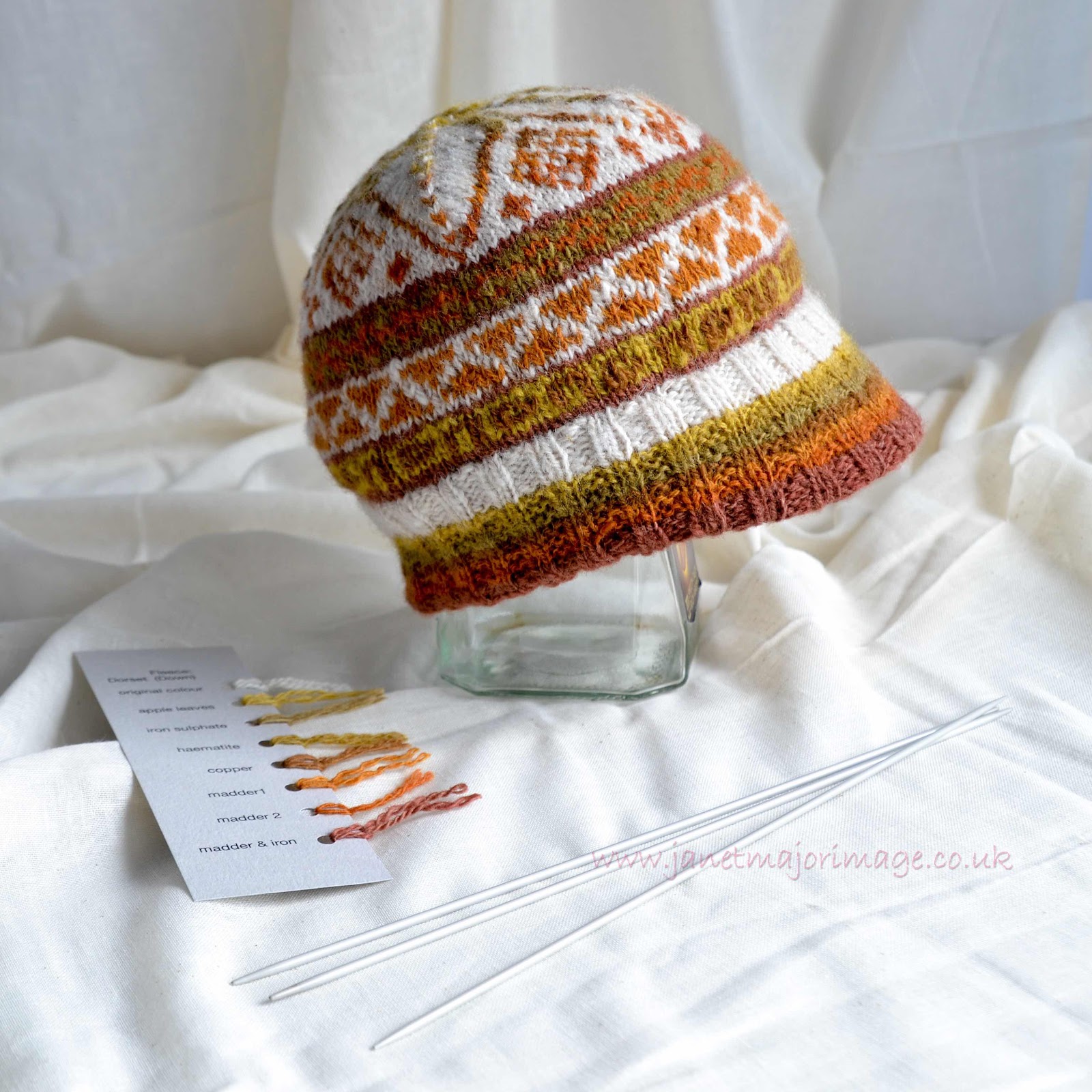 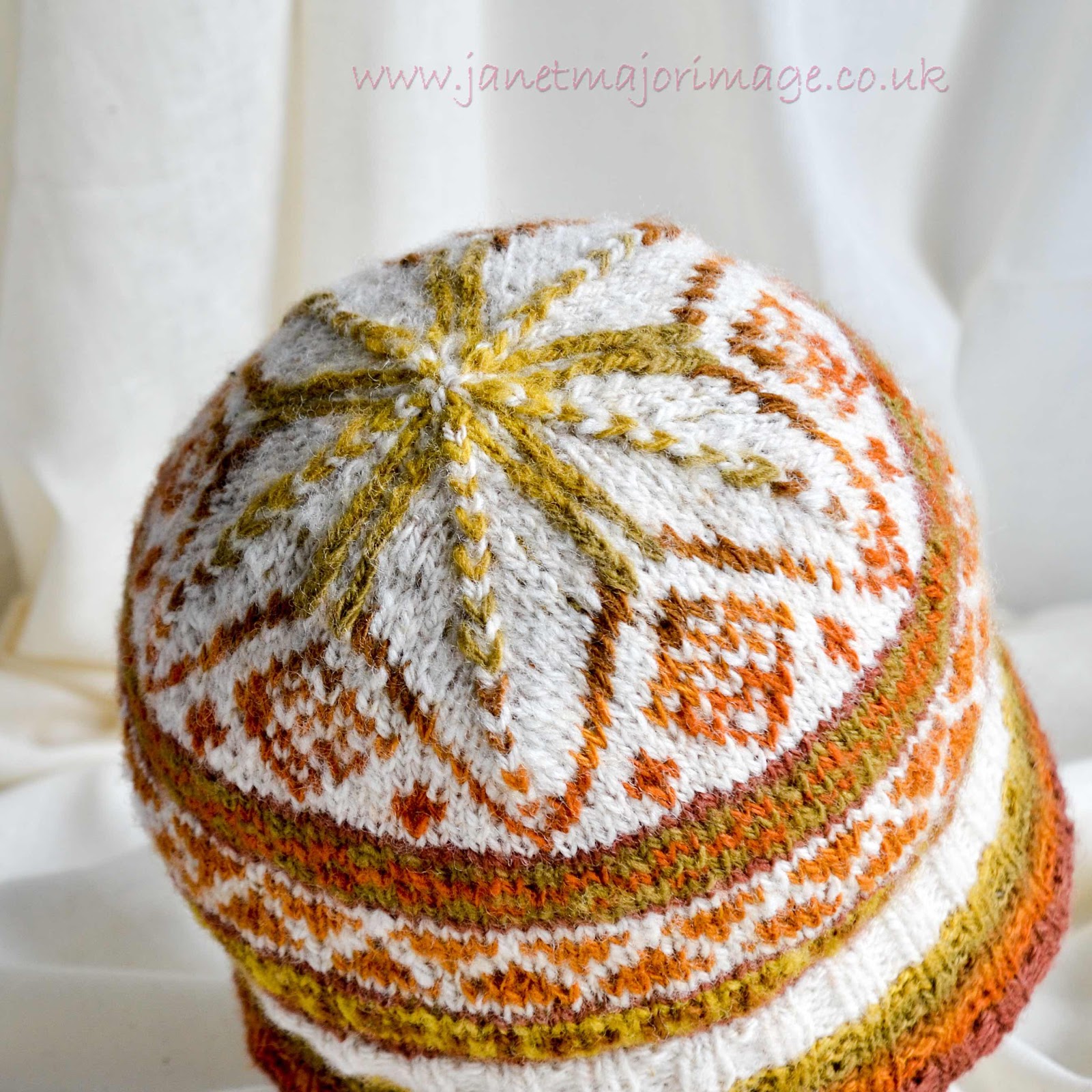 There are many lessons from this hat, too many to list here!

I have enjoyed knitting it and really like the peak. Perhaps this year my wool week hat will have a peak!

Posted by imagejem at 06:01 No comments: