Cochineal Dyeing in Norfolk and a colour conundrum

Last Sunday we ( Michael and I) had an interesting and enjoyable day. I had been invited to run a Natural Dyeing workshop for a group of the NSTG (Norfolk Small Holders Training Group) - see note 1. We used our local village hall for this.
I had decided that by using cochineal I could teach the basics of preparation which the attendees could repeat  and we would still have enough time to dye several colours. I do like people to take home skeins of a decent amount from a dyeing day with me as well as the knowledge and understanding to proceed alone. I also love dyeing with cochineal! ( see my website and index on the left for more examples of my cochineal dyeing). 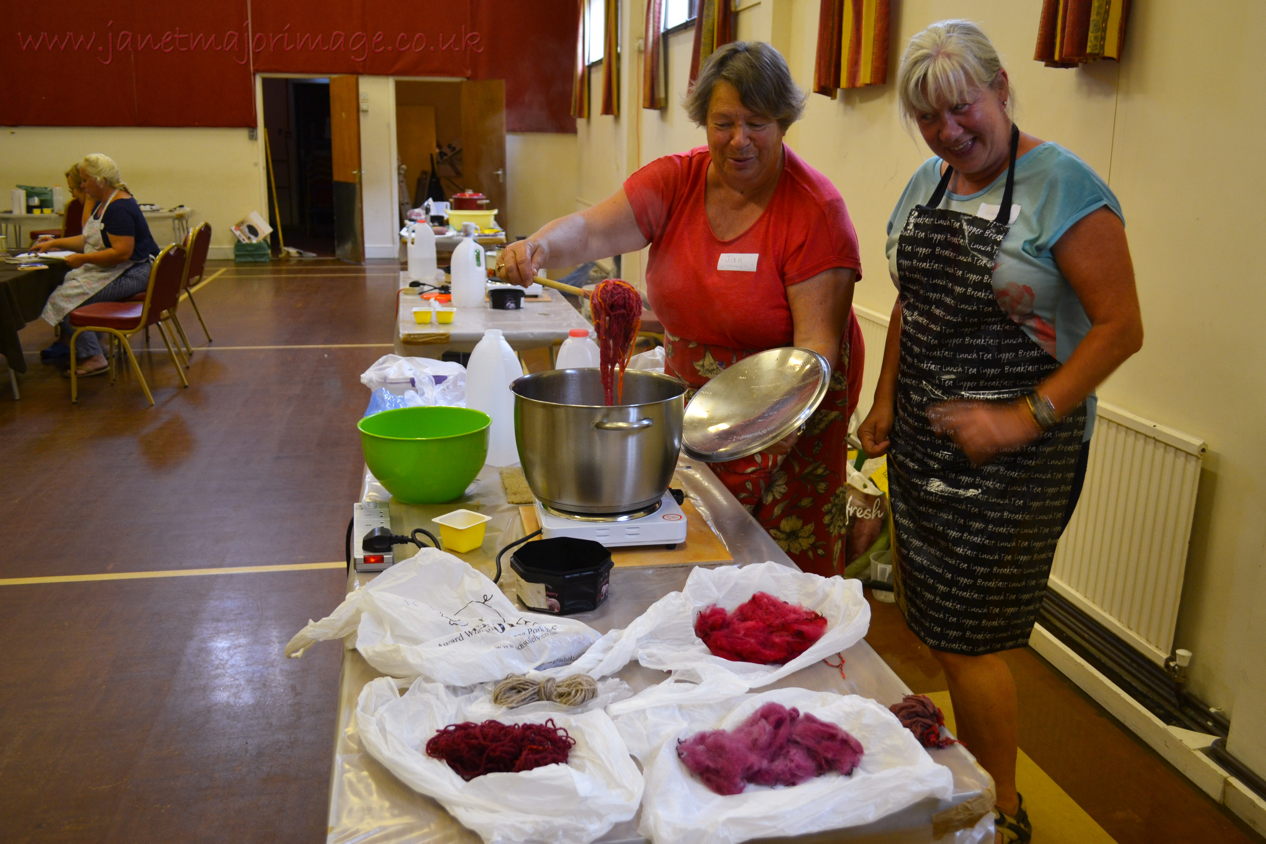 I have dyed with cochineal many times and run successful workshops using it. However, being a teacher of many years, I know that you always have to check the experiments before the class.
I had a mordanted a skein of yarn from 2011 and decided this would be fine to use. So I 'wetted it' and dyed with cochineal as I do normally and horror of horrors I did not get a beautiful cochineal red as I expected. I assumed the mordant  must have worn off ( intrigued how though) as I was getting an unmordanted yarn type colour. ( middle bottom of photo)
This is the image of my cochineal dyeing for the day 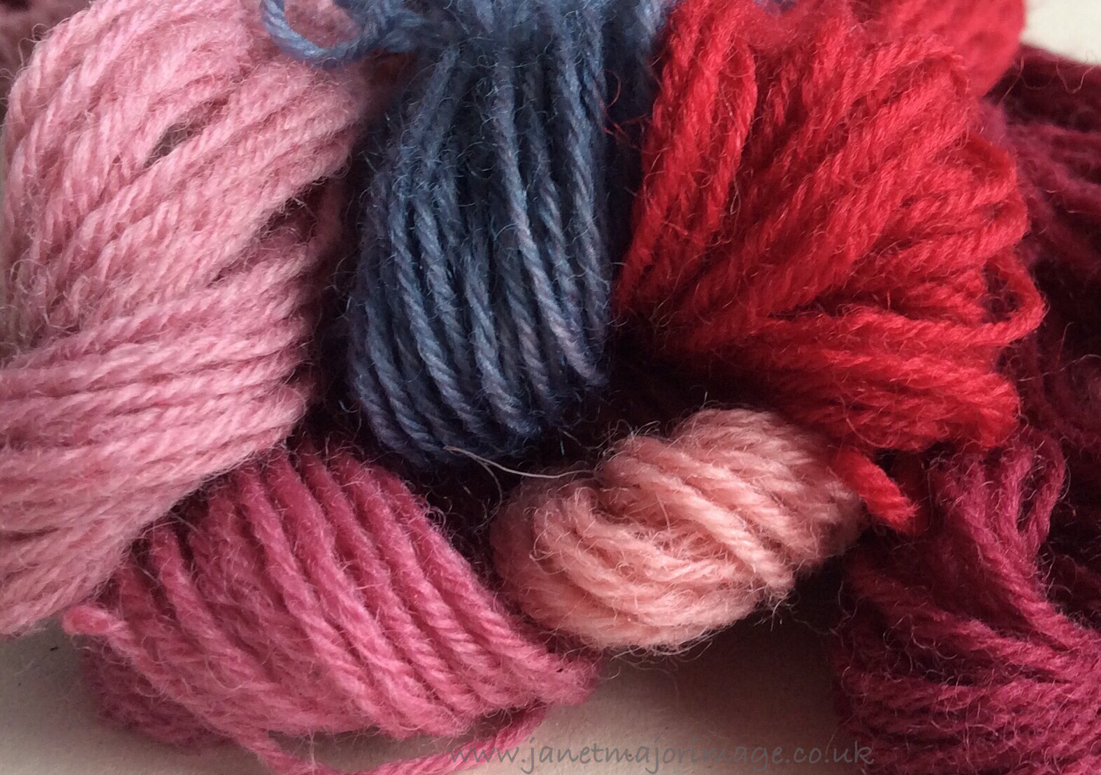 So clearly I had not to 'cut corners' and decided to do the whole procedure from scratch - scouring, mordanting and dyeing. This I duly did and got an even 'cooler' pink - left of photo.
I decided to up the percentage of cochineal to 20% as the pinks were far too pale as well as too cool!
But it was time to get to the science of this. I had used cold water from the house for my first attempt, a warm pink but pale skein - we have a water softener as the water is very hard in Norfolk, so this water had been softened to some extent. For the second skein ( cooler duller pink) I had dyed using the outside cold water tap - no water softener. So we decided I would do two more skeins. The outside cold water tap would give me the hard water and I would also use use rain water from the covered water butt. As soon as we dissolved the cochineal in the water butt water it went red, not some cool pink shade so this was promising.
So it was time for the pH paper now. Our water is hard and alkaline whereas the rain butt water was decidedly acidic.
Looking at the structure of  carminic  acid in cochineal beetles confirmed that the dye would be sensitive to pH changes.
The colours this time are bottom right corner of the picture cochineal in water butt ( soft, acid )water which gave an expected cochineal colour and bottom left cool but deeper pink from the outside ( hard, alkaline ) water.
We were getting somewhere. But I was not satisfied, by using 20% cochineal the colour was deeper than I had achieved before in Cheshire - which has soft water- and I thought it was a bit too deep!
So another skein was dyed at 10% cochineal using water butt water and hurray, it was the same colour as that from Cheshire from the tap. ( top right in photo - scarlet colour).
This is all very interesting and the research has not ended yet. I know that Norwich was  good for dyeing with madder to make Norwich Red as the water was hard and yet with cochineal to get a good red I need soft acid water. So it's time to get into the loft and get my organic chemistry text books out to look at the structure of the relevant molecules in more detail.
The mauvy  blue skein in the centre top of the photo is obtained from dipping the pink ( centre bottom skein) in indigo, something we included in the workshop.
Another interesting aspect of the day was that the attendees brought their own fleece or yarn to dye and thus we got even more variation in colours from the different breeds which was great.
This is not one of my best photos but this shows some of the Dyeing produced during the day. 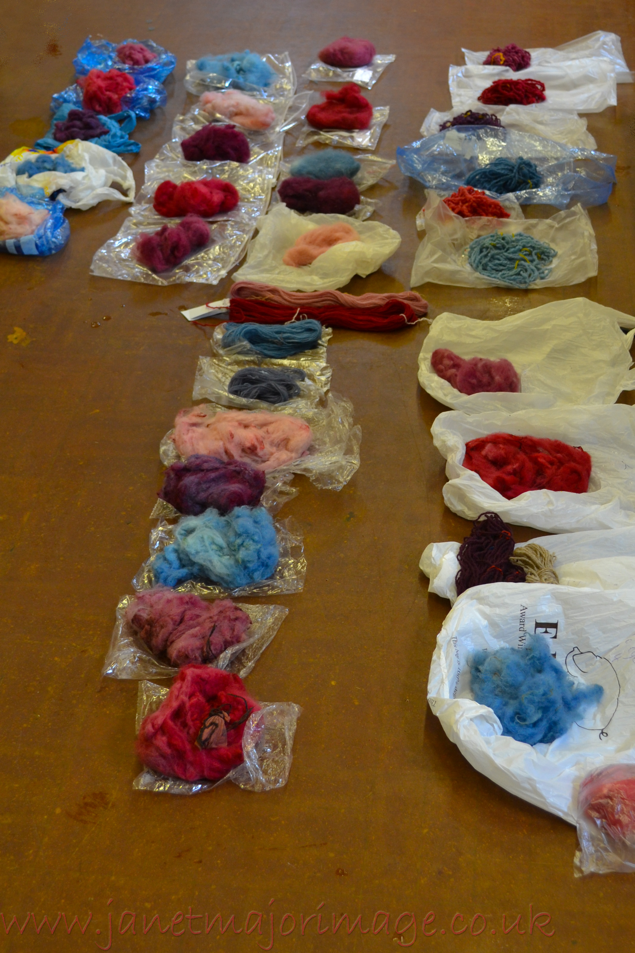 Natural Dyeing gives such rich colours and keeps the 'chemistry' brain alive! I have found this lovely quote from Ethel Mariet 'Natural dyes are alive and varied holding the light as no chemical colour can hold it, and they are beautiful from their birth to old age when they mellow one with the other into a blend of richness that has never yet been got by the chemical dyer.'(1872-1952) See note 2
If you've managed to read this far, I think you deserve a stiff drink!
Notes :
1. Norfolk Smallholders Training group have their own website - www.nstg.org.uk
2. For 'chemical' perhaps 'synthetic' might be a better term.
Posted by imagejem at 12:38 3 comments: