Getting this lighter olive was quite a challenge as it was the second green I was aiming for and needed to be lighter than the one I had produced already ( 2 skeins to the right on image of August 19th). Part of the problem was I needed to get a darker shade 'wet' as when it was dry it would be lighter . However it was not to be so dark it would be too close to the dark olive I already had. As I have noted already I was doing trial skeins - but on different yarn and as anyone who has done natural dyeing knows it is not an exact science and seemingly doing everything the same can sometimes give different results.

So for this olive I used elder leaves and stems that I gathered fresh, boiled up and allowed to cool overnight. I then heated the wool with the elder extract ( it gave a glorious bright yellow) then removed the wool. After adding modifiers of copper, vinegar and iron I heated the wool in the extract again and produced this glorious olive colour, I added further iron until I judged the olive was the right olive. After rinsing and noting as always the fastness of the colour it hung on the line to dry and I was pleased and relieved to say it was distinctively lighter than the olive I already had. Another success!

GOLD
This colour was not dyed specifically for the hat, but is the exact colour that I needed so I decided to use it. The wool is some previous handspun Jacob and I had dyed it with heather ( again following an alum mordant) and then modified with tin. For some reason I had done two small skeins which was just perfect as I could put them between the two olives and purples to see how they would look on the hat! They were dyed in 2004. The rest of the yarn was used in a cushion and they were left over so I am pleased they now have a use. 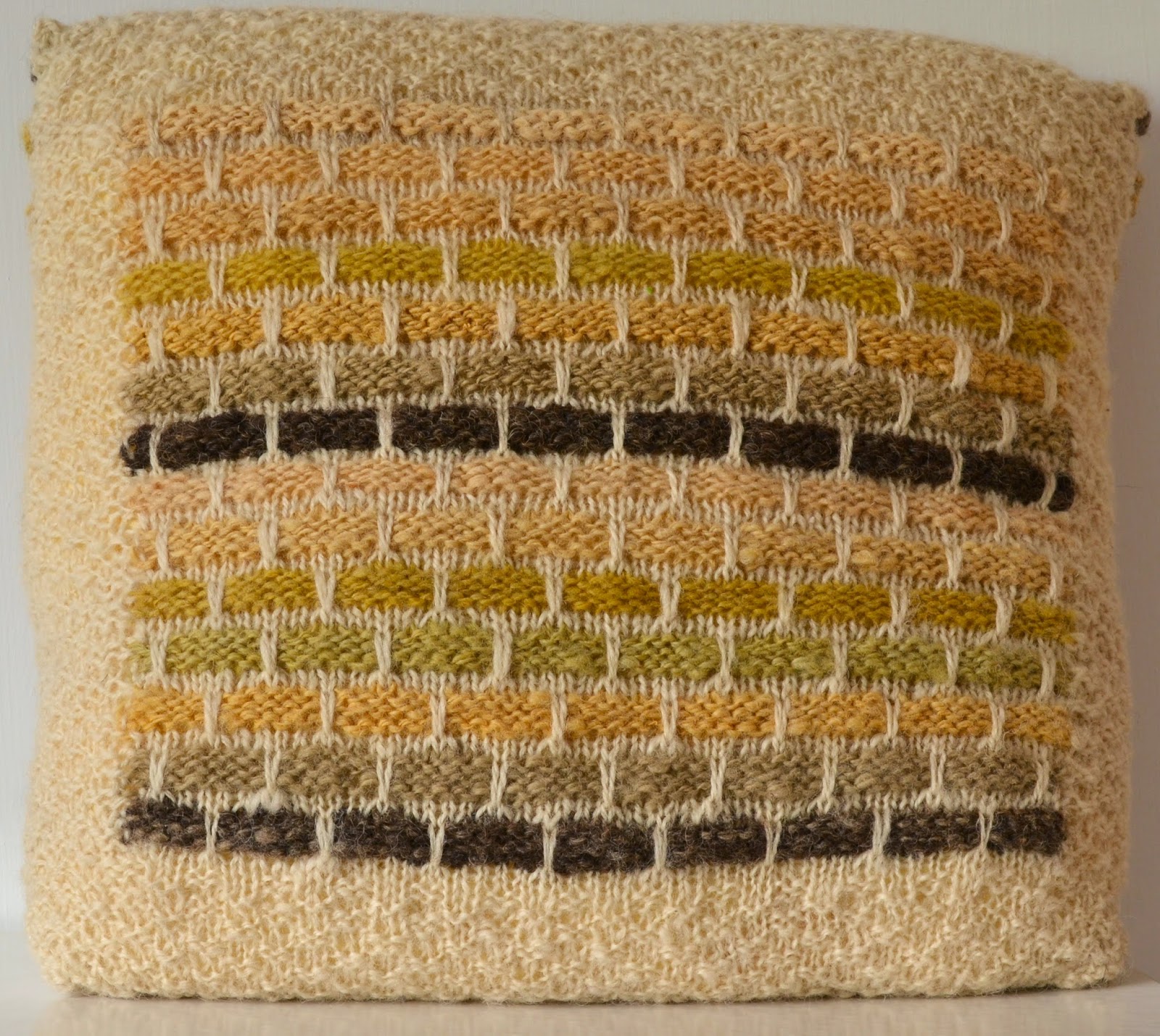 Posted by imagejem at 06:58 No comments:

I knitted a sample hat to work out how much yarn to dye and tried to remember to note the length of each colour used! I tried to use colours something like I was aiming to use. 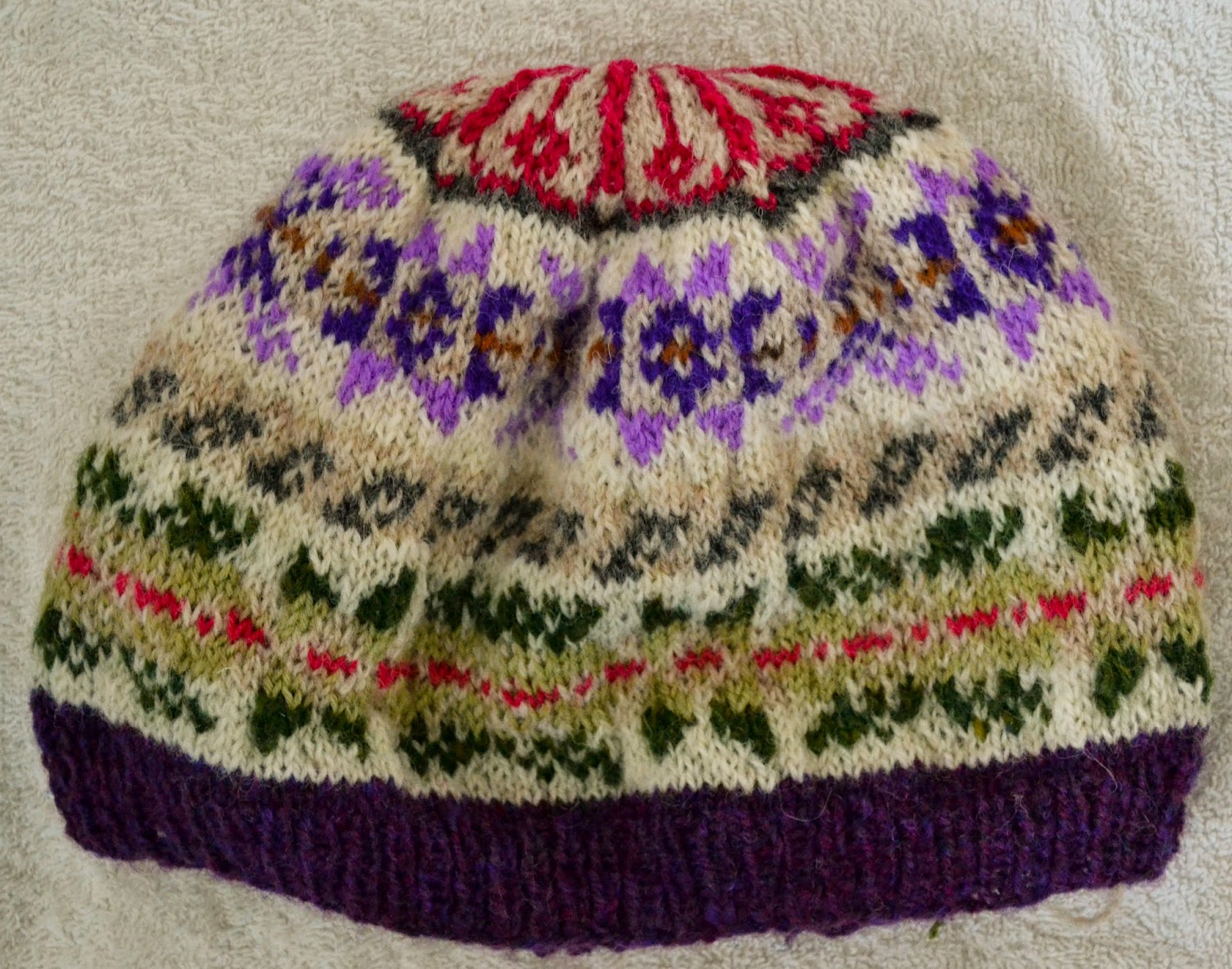 All dyeing was carried out on well scoured yarn which was mordanted with alum and cream of tartar.

Following the picture (post of August 19th)
The left hand side DEEP PINK
This will be the centre area of the crown (as in the sample hat) and is the most striking part of the hat. It was one of the most straightforward to dye. It was dyed with 10% cochineal, starting with crushing the beetles!


Second from the left GREY
Getting grey was difficult. For many of the colours I did several trial runs. I had a supply of 10g skeins of commercial yarn already mordanted, I knew these would give me a reasonable, although not entirely accurate, match. However everything I tried was way out on grey. I had got all the other colours complete and my options were running out on getting grey when I remembered that I had a solution in my store in the garage. This was left over from making a part of a fancy yarn a few years ago for an exhibition entry. So I tried this on one of my trial yarns and it was perfect. My only regret is that it was not labelled that well - it just said 'logwood, elder and tin, 2011' but I have no-one to blame only myself. I do like to know exactly how I get a colour but in this instance it does not matter. In the unlikely event that I need some more I do have plenty left. Natural dyeing is not an exact science but I can make sure that my labelling is more meaningful in future than just giving me names!


The next post will follow along, although the next skein is the natural washed fleece – just for comparison – so lovely on its own. I decided it was too stark on its own and did dye it 'beach' colour!
Posted by imagejem at 07:46 No comments:


I have dyed this wool to knit my hat for Shetland wool week, you can see a picture of the seaweed that has been the inspiration for this – taken on Skaw the most northerly beach of Unst –the most northerly beach on Shetland. I have also included a picture of the hat that I knitted as a sample this was so that I could work out how much wool I would need in each colour!

All the yarn for the real hat was hand spun. I intended that it was all going to come from the fleece that I hand picked from Jamieson and Smith on my visit to Shetland in 2012. I think it was Ella that helped me on that Saturday afternoon in the fleece store! However to enable me to get the gold colour I had to cut a corner and use some of my early handspun Jacob yarn (the gold), but this brings back pleasant memories too so I am happy to include it. 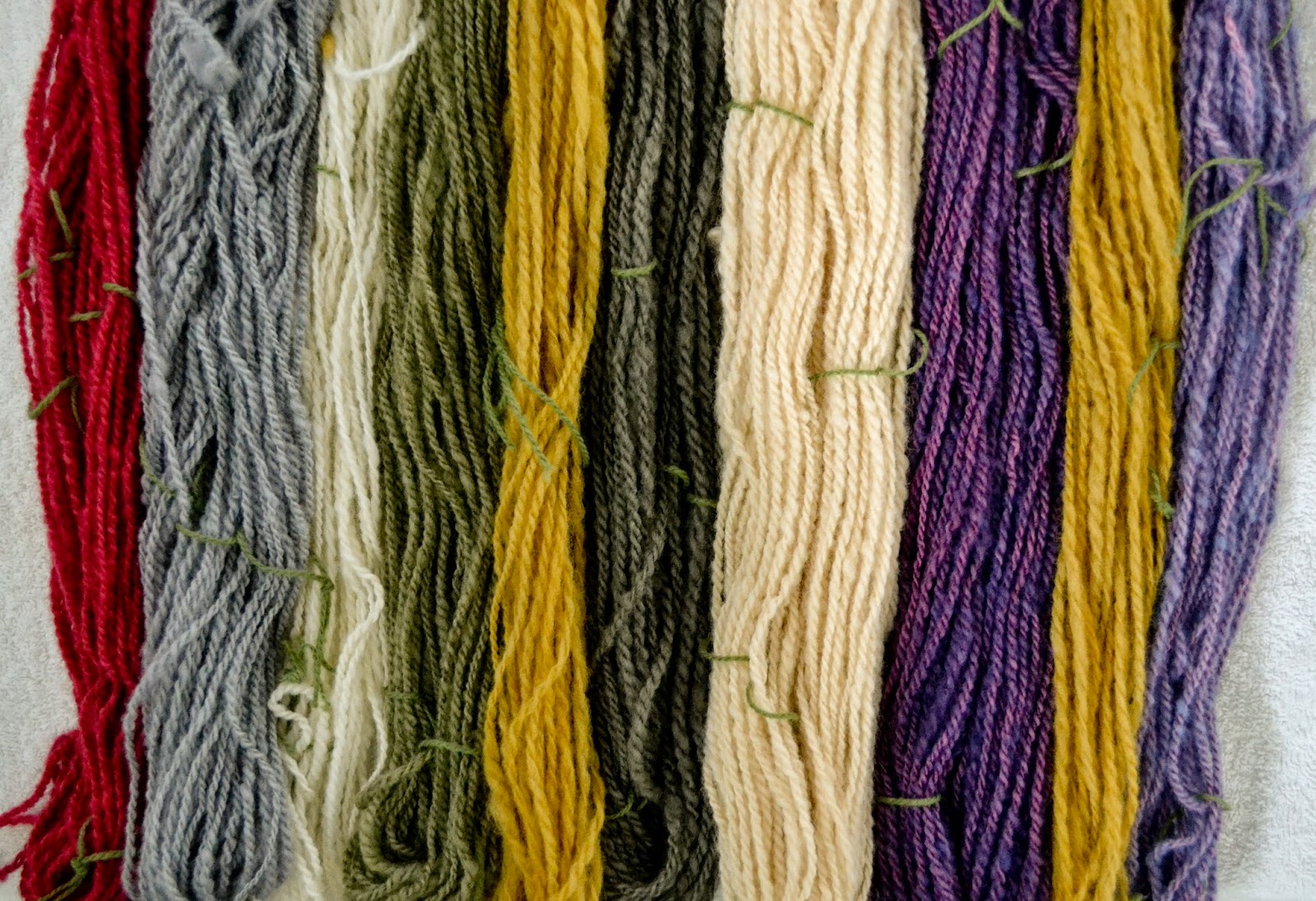 The dyes I used for the hat were : cochineal, elder, heather, indigo, logwood, marjoram and silver weed. The yarn was mordanted with alum first and some yarns were over dyed whilst others were treated with modifiers to get the exact shades, well as exact as I could get.

If it doesn’t work out I can still wear the sample hat – that is either Jamieson and Smith’s best jumper weight yarn or some of my own handspun and hand dyed!

There are some pictures on my facebook page at www.facebook.com/janet.major