The red woven handbag and its story

Some time ago when we lived in Cheshire I decided to make my own handbag with pockets. I owned a handbag where I liked the design, 2 pockets on the outside (with magnetic closures) and 2 on the inside (with zips). The handles were long and it was great on my shoulder. It was also a good size.....I do not do a  small handbag!
I deconstructed this as well as I could. Fortunately making notes of the order of construction, this was SO important as I found out later. Then I used this, as a starting point to make my own handbag.
We had recently been to The Outer Hebrides and I had bought a skirt length of Harris Tweed from the weaver in her idyllic studio in Plockpool, Harris. I used the remains of the fabric with some matching brown fabric I bought from Linton Tweeds. (1)
This was handbag one, made in 2012 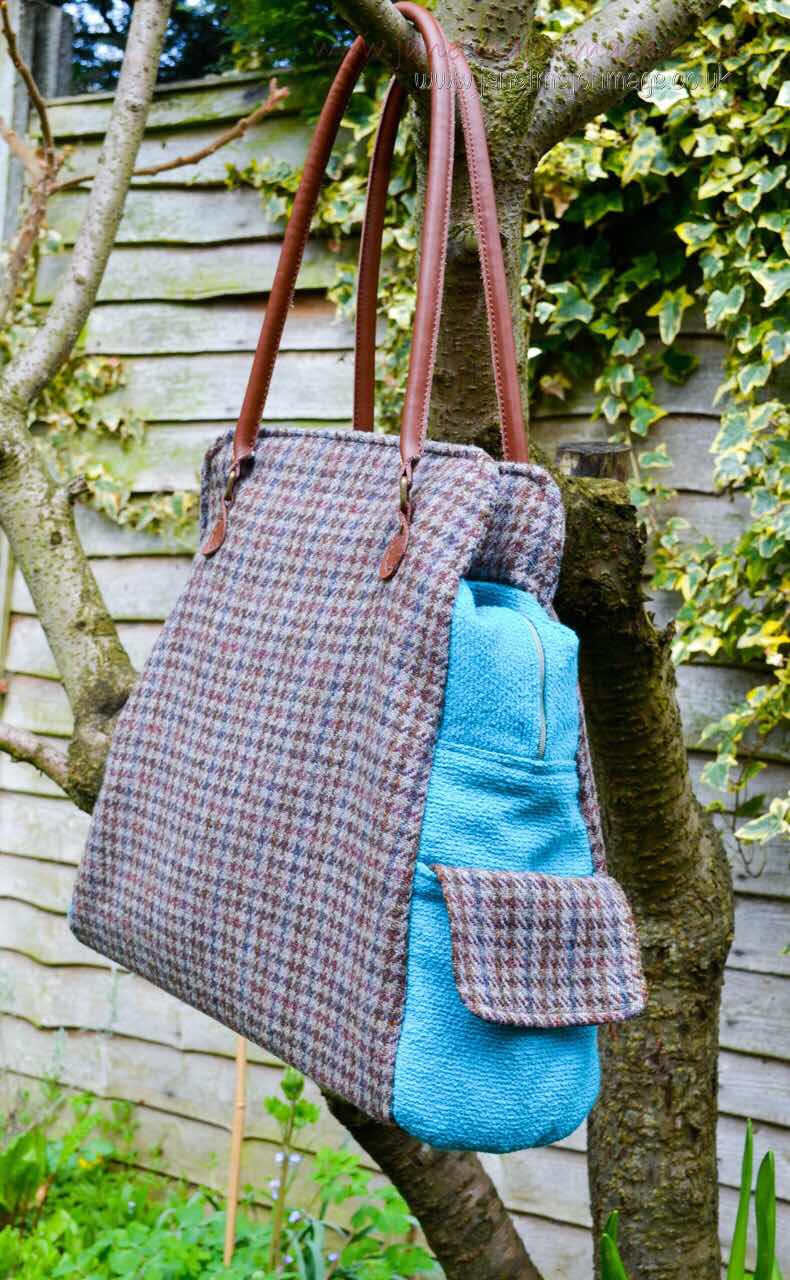 So when I made my blue tweed coat, post of 1 Feb 2012, and had some material left over, it was obvious I should make a blue tweed handbag too.  I have opened one of the pockets so you can see the lining. 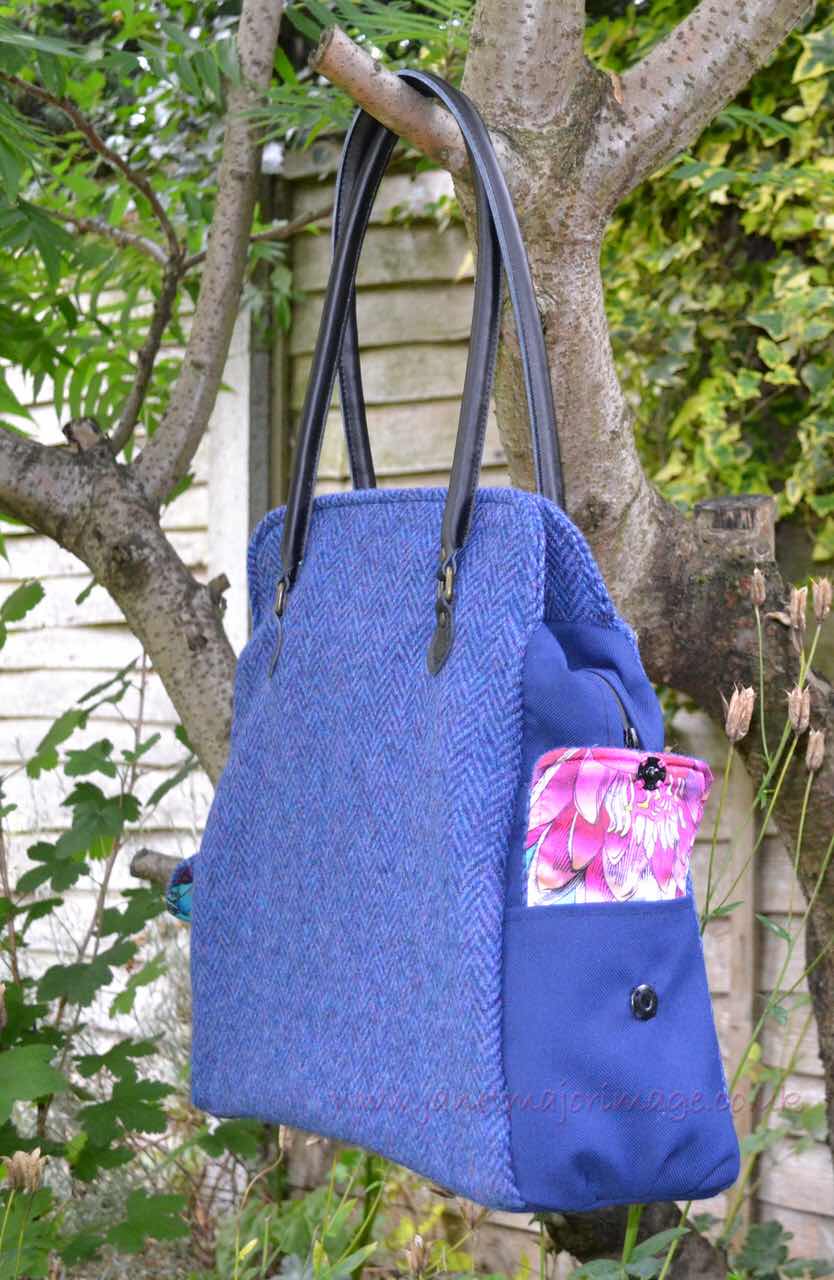 After this I decided to alter the brown handbag as I thought I would get more use from it. 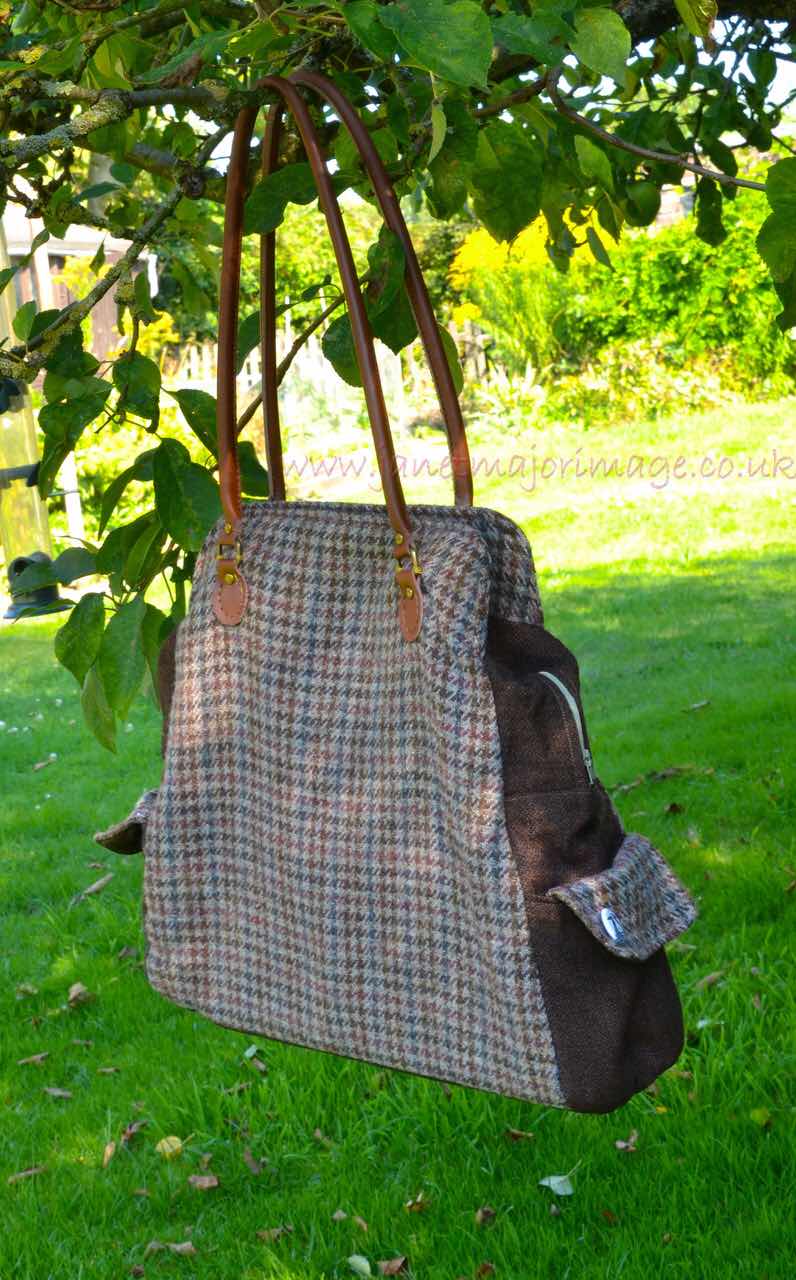 (Apologies for the less than perfect photo, it is 30C outside and this is the best I can do in terms of shade!)
Both handbags are used all the time still I just decide which best matches my clothing.
But what I really wanted to do was weave my own handbag. 2011 saw the arrival of my floor loom, which came as a massive kit from America, but that is another long story. After doing some trial weaving to get used to the loom, it was time to weave the fabric for the handbag. This time it was to be red and black and woven in Shetland wool (2ply jumper weight). I felt I needed to weave plenty of extra fabric....which I did.There was lots of fabric. Friends suggested I make a skirt instead, I resisted for awhile and finally saw sense and that was when I made the red and black skirt that I love and would not be without (front page of my web site).
We moved house, coming back to Norfolk in the autumn of 2014 and I decided once the loom was up and running that I would weave fabric for a handbag. It would be red and black in wool, the same wool  but not the same pattern as my skirt, and I would not weave enough for a skirt.  This took longer than I thought - there were house  things to sort and Norfolk to re-explore.
The weaving design I used was Strickler number 13. (2) I had bought a  floor loom that would weave 97 cm wide but this time I would weave a just bit more than my pattern needed in both length and width. My handbag pattern needed 107 cm long by 76 cm wide. Calculations were done and checked and rechecked before I wound  the warp as I needed to allow for take up  on the loom, loss in washing and fulling  and to match the pattern where needed.
Beginning weaving 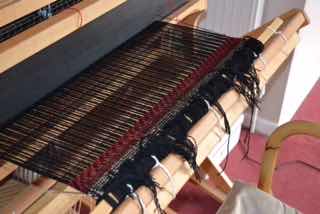 I firmly believe that the longer spent in planning and doing trials, the better the result.
The cloth before washing 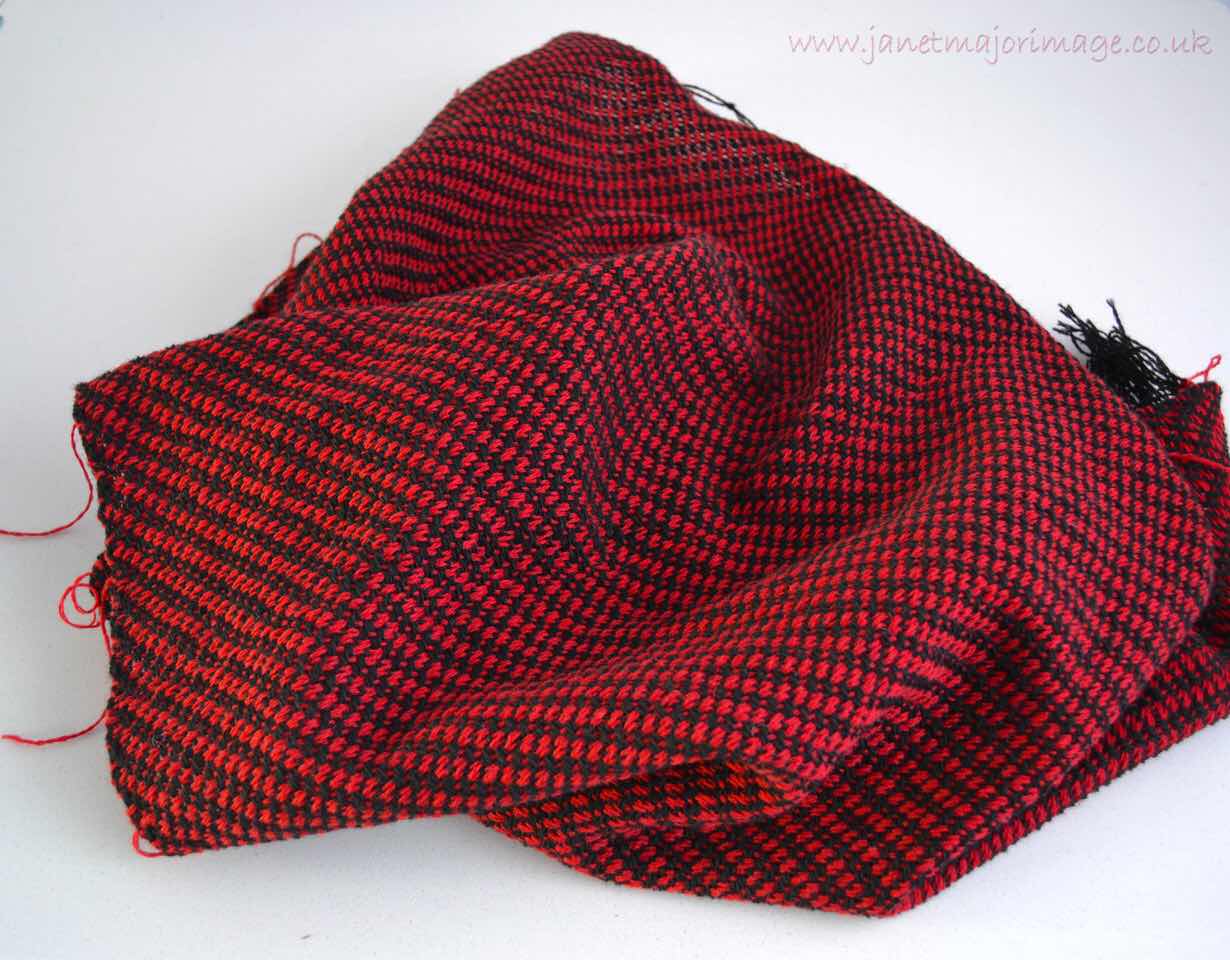 The weaving was complete, it was washed and ready to be made into the handbag.
Then the fabric sat as more life got in the way- I was doing a lot of natural dyeing as I had access to so many wonderful plants.
I gathered the lining materials. I like to have special linings in the items I make, this time the silk I was going to use came from Cheshire, plain red for the main part of the lining and a super design that I had found at a silk sale from a mill outside Macclesfield in Cheshire and had used in the blue tweed handbag. The contrast fabric was going to be black linen and I had trouble sourcing the same quality for this. (In fact  this is still an ongoing search). I also needed iron on interfacing, stiffer interfacing for the base and leather handles (3). Then there were the 3 zips, the 2 large press studs and the studs for the base of the handbag.
In all 46 pattern pieces are needed for the handbag and it is not a quick make and I use both my normal sewing machine and overlocker and constant access to the iron and ironing board. I also make good use of this clapper- an essential item to my sort of bag making. 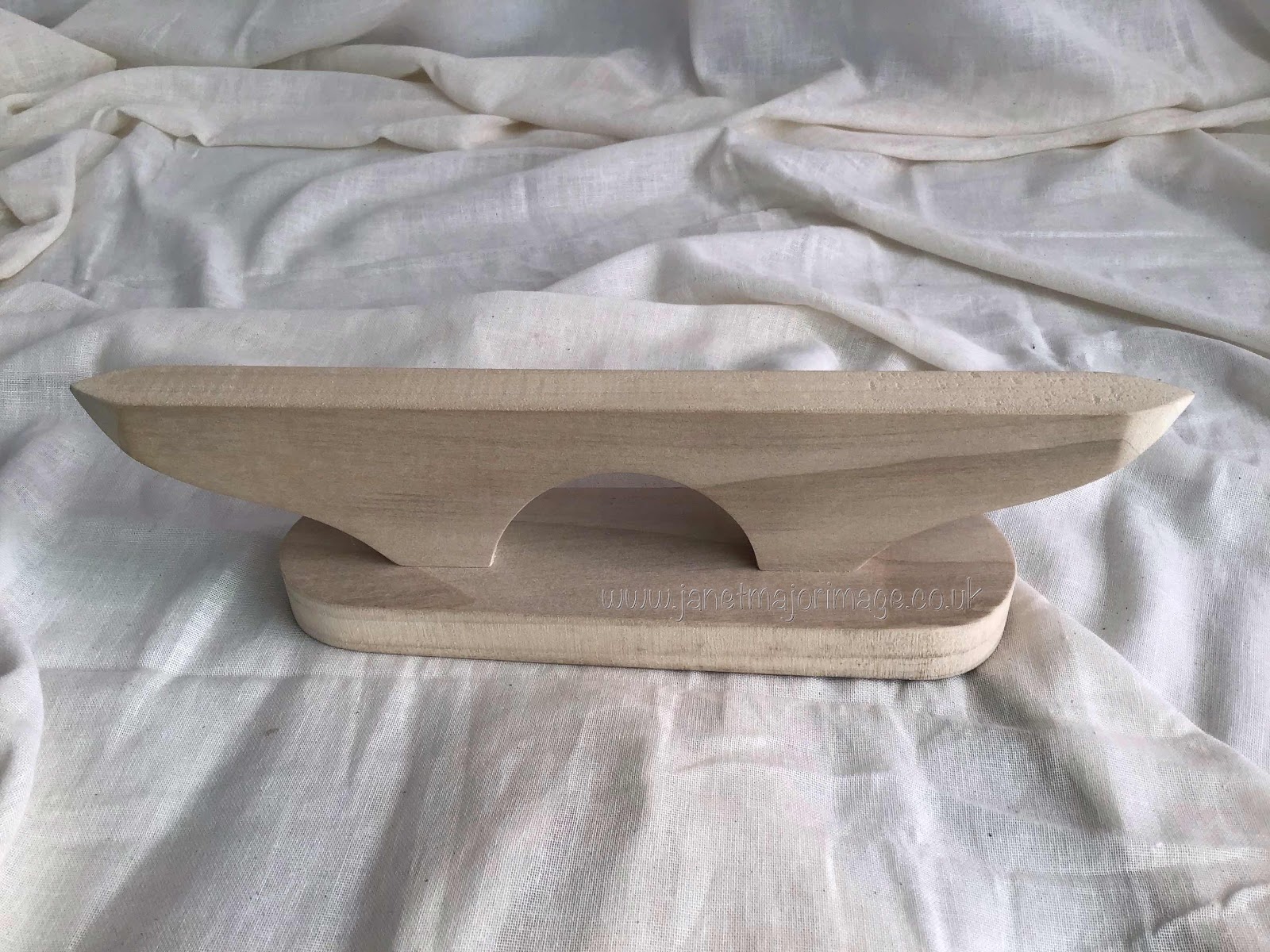 After several days the bag was complete and I had only a tiny amount of fabric left and so made a couple of pockets for the back (side near me of the handbag). I have found these little afterthought pockets invaluable, for my bus pass, library card and linen handkerchief. Many years ago I used to crochet, in very thin cotton, an added fine lace edging to handkerchiefs  when my eyes were perfect....but that is another story.
I love this bag even more than the other 2 as it is woven from Shetland Yarn and I did the weaving. It was first used in public  at Shetland Wool Week 2018.
Completed bag. 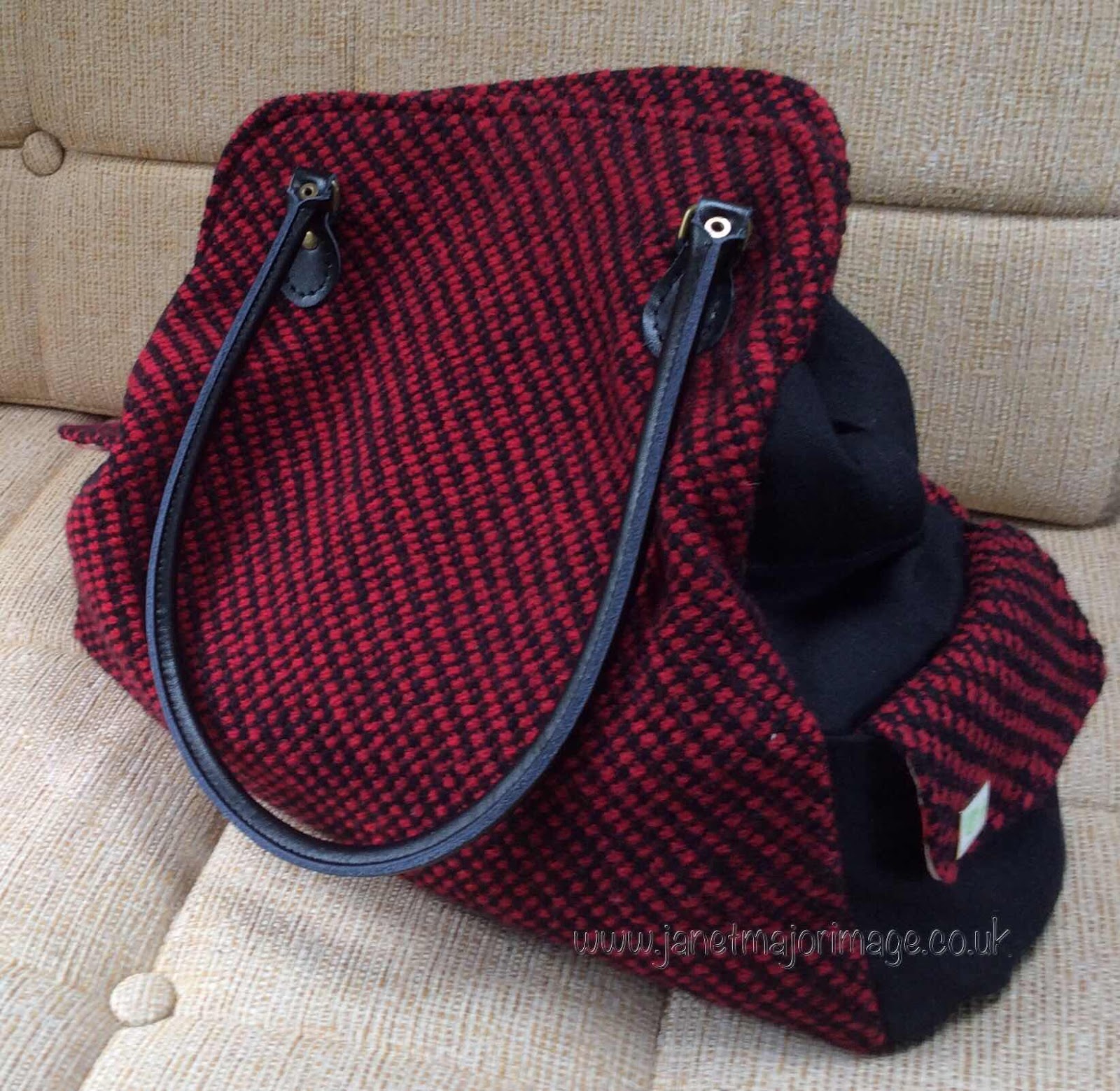 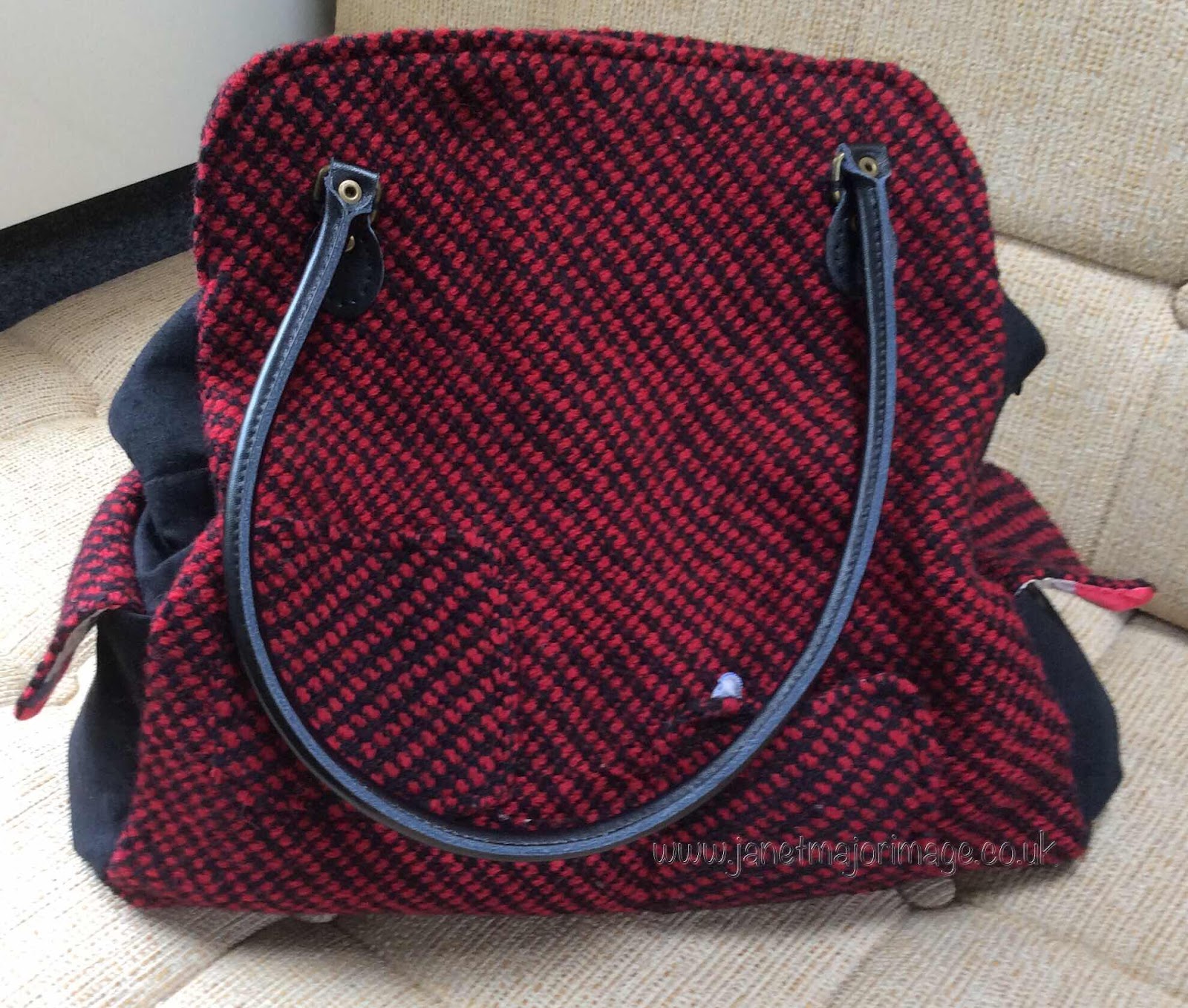 The next bag is going to be lime and moss green based, and has reached the ‘I am happy with the weaving sample’ stage.
People ask me why  I do not sell what I make....if you have read all this you will know why! I enjoy the process as much as the product and wouldn’t want it any other way.
Notes
1. Linton Tweeds are based in Carlisle, the firm is over 100 years old, they make super fabric and have sold, and still sell, to international fashion houses. They now have an online shop as well for fabrics and wool www.lintondirect.co.uk.
2. A Weavers  Book of 8 Shaft  Patterns by Carol Strickler. A great book, from this a whole Facebook group has arisen called ‘Strickler in Colour’ which is inspirational reading for those of us that like her designs.
3.  I get my leather handles from www.bag-clasps.co.uk
Posted by imagejem at 02:12 No comments: