My (and Michael's) walking boot laces have been very successful. They are strong and what is even better is that they are flat - not round- and so they stay done up. They fit into my category of useful and beautiful (to me anyway). They have sparked some conversations when out walking which has been nice. 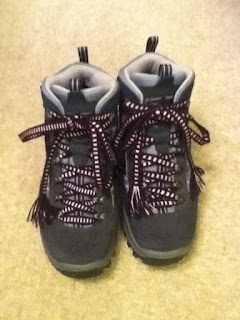 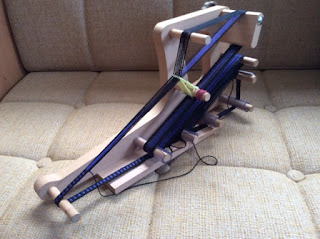 I think while I have the pattern in my head I will do a light coffee/ black pair too as my 'go to' boots for winter and  spring, summer and autumn have the dreaded round laces!
The boots are black with lovely embroidered eyelet holes for the laces but the embroidery is in light coffee!!!

Posted by imagejem at 08:10 No comments:


Besides always carrying a fine embroidered linen, crocheted edged handkerchief (blog of 15 August 2015), I also like to carry a few tissues with me but I do not like the little packets of tissues you can buy- they work out very expensive compared to a box and they are not 'a thing of beauty'.
So searching around for ideas I adapted a design. I have no idea where it came from now!
This is the finished item,
closed: 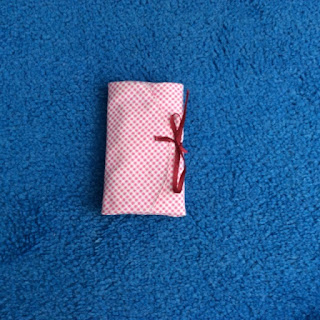 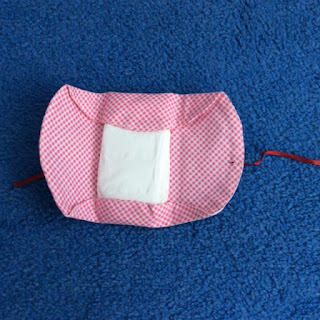 Working out the neatest way to make it and the ideal size ( as small as possible but yet functional) took quite a bit of planning. But once the planning is done and a sample made, the actual item went well. I used up some of my stash - I think the remnant of a dress in the 60s and the outer section has fine interfacing to give some support. Another success utilising both the overlocker and 'normal' sewing machine as well as some hand stitching.
I think this is a 'thing of beauty ' in my bag and also easy to refill.
Posted by imagejem at 09:05 No comments:

We are now back in Norfolk and have had a wonderful holiday in south west Scotland and the remaining ‘Creativity’ postings are all written. The intention was to add them while I was away but I have been hampered by my lack of internet access. Now this one is out of sequence but I am posting it first just because someone who reads it might like to get to Barnard Castle before the 25th of October 2015.

Sometimes the nicest things happen when you least expect them. We had to alter our return travel to Norfolk from Scotland by fitting in an extra night! Splitting the planned leg of the journey gave us Barnard Castle and suddenly I remembered the Yves Saint Laurent exhibition ( YSL - Style is Eternal) at the Bowes Museum  and yes it was still on. The next problem was to get tickets at short notice - and hurrah I finally managed it. So we got there early and after delightful coffee and cake in the cafe - highly recommended - we got in to the exhibition before our slot. It was beautifully quiet so I was able to talk to a very knowledgeable lady about the marvellous toiles and other items in room 2.
So lovely to see such superb toiles and the care taken over them. They were mostly in calico and this one is showing just the sort of detail I love....


The match marks for sleeve insertion 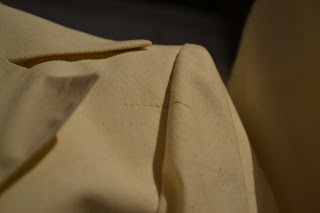 Matching stripes on another garment 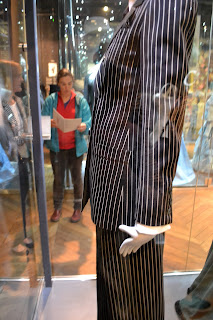 So much to enjoy, I concentrated really on looking at the details .....
I have seen the work of other 'famous' people and at times been very disappointed over 'finish', but these items were in a completely different league. Nothing short of perfection.
This quote from the exhibition sums it up for me:


‘Elegance is a way of life, a way of moving through the world.
Isn’t elegance about completely forgetting what one is wearing?’

The whole exhibition is stunning, brilliantly put together and you can get close to the garments and other exhibits. The labelling is great and there are several videos that add to the whole experience.
If you have any interest in sewing or style do try and see this exhibition - it ends 25th October but I would recommend booking as it did get busy with ( I guess) 2 coaches of fashion students later on. It is the first exhibition of his work in the United Kingdom and being packed up and returned to France at the end of its time at Bowes Museum.

Macintosh on the way up and Yves Saint Laurent on the way back - you can't get much better than that for inspiration in my book.

Posted by imagejem at 10:03 No comments:

I have just visited a truly inspirational group of houses. Number 78, 80 and 82 to be precise; although the transformation has been so well thought out that it appears in the inside to be one building.
Some of you will know what I alluding to - Derngate, Northampton. Number 78 having been owned by the Bassett-Lowke's who commissioned Charles Rennie Macintosh to redesign the interior in 1916. This is the most complete of Macintosh's commissions in England.
To my mind this is a stunning house and if you have any interest in Macintosh it is a 'must visit' place. I would recommend taking a tour - do book before. It is a  lovely spot also for lunch - again advisable to book. We actually got there early, bought a guide book and had a look round before lunch and the tour and this worked really well.


Number 78 and the two adjacent properties are now run by a Trust and although quite a bit of the furniture is replica, this is because the originals are in other places eg the guest bedroom furniture can be seen in the Hunterian (I believe).  The Hall/Lounge and Guest Bedroom both have the 'wow' factor. It is an interesting house as 4 'bodies' had a hand in the renovation. The original architect who got the plans passed, the Bassett - Lowke's and Macintosh.


This is in the hall/lounge. This is the ‘wall’ to the stairs and makes clever us of the light through the glass inserts. 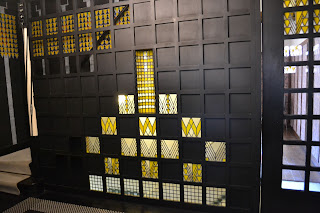 Clever use is made of triangular shapes in the Hall/Lounge, particularly, and I am wondering whether I can integrate this idea this into a knitted hat I am currently designing.


This is a view of the back of the building that shows an interesting set of windows and balconies. The house as you can see is narrow ( just the white part is number 78) and the redesigning is thus very clever! 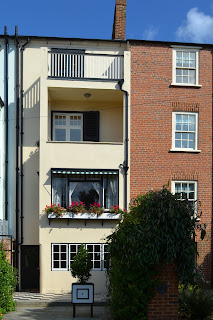 All in all a fantastic day and very inspirational. It does the spirit good to see such things.

If you are at all interested do take a look at the 78 Derngate website as there is a virtual tour of the property.

Posted by imagejem at 07:49 No comments:


I have seen a friend obtain beautiful soft shades of peach and yellow from dyeing with Apple. I have never tried to dye with Apple so thought I would give it a try. I am going to try sample skeins with the bark and the leaves- separately.
So the first job is to get enough bark to dye with. Usually increasing the surface area helps and another friend also suggested bark chips. So that is what I will try with soaking over 2/3 weeks.
Jill Goodwin, a dyer who I respect suggests soaking in soft water and also adding 1 tablespoon of vinegar to each batch while soaking so I will try both there tips. I guess the acidity from the vinegar is to help the rotting process. She notes pinks, browns, buffs and yellow so that is a wider range than I was expecting.
The leaves might be less useful, I have read that leaves in spring are what is needed.... But the leaves are looking healthy so I am going to have a try.
That was the theory, the practicalities of getting 100 g of Apple bark from my lovely old tree has proved more difficult than I thought! The large branches are all covered in lichen which I decided would affect the dyeing. So I stuck to your branches about a third the width of my little finger so getting 100g of bark from them turned out to be a laborious task. I thought I had a lot but when weighed it was 20g!! But I was surprised that after 3 hours soaking in water it looked like below. I think this must be a good sign. 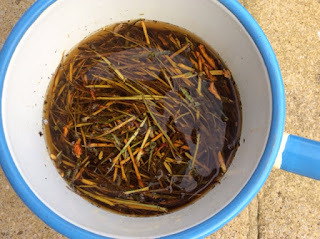 Posted by imagejem at 07:19 No comments:

Natural Dyeing is great fun, but it is useful to have a good base to start from, enabling more creativity without re-inventing the wheel.
I try and keep 10g yarn samples and a Dyeing File of dyed yarn butterflies with detailed methods.

Over the years I have got better at :
- Labelling my actual samples
- Maintaining each dyeing record in the file

I try and add to the yarn label
- The fleece type
- The date
- The mordant ( if any), dyestuff and concentration
- Modifiers used

The Dyeing record is much more detailed and I have arranged this as a double page spread with yarn butterflies of the dyed yarns. 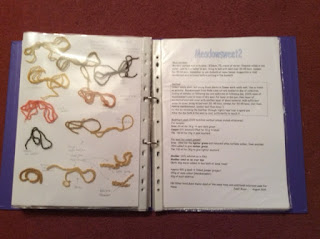 I often repeat dyestuffs I like and it is useful to know exactly what I did.

As I have said ( many times ! ), I like to tell a story in my spinning, weaving, dyeing, knitting, sewing etc and this file is the place to turn to to know that story for my dyeing.
It's also lovely to look at during the year
Posted by imagejem at 12:33 2 comments:


Actually wool is difficult to dye black with natural dyes! The best bet is to start with logwood.

From a workshop I led some time ago ( 2006) I have some examples of logwood that are violet, very dark brown and the elusive black depending on which additive was used on the mordanted wool that was dyed with logwood. It must have worked once and the samples in my Dyeing Folder are still fast.

So now to repeat this and try and get enough for a decent sized skein.


Stage one is to scour the yarn.


Stage two is to mordant the yarn with alum and cream of tartar.

So this is stage three, 10% powdered logwood was used for the dye bath and after dyeing the yarn was left overnight to cool in the dye bath. 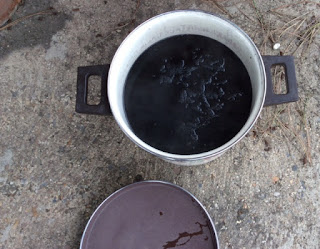 Reference in 'the Dyers Assistant' James Haigh 1800 has a recipe with logwood, but he appears to use elder, sumach and soda, along with much copperas after the initial mordanting. My previous sample just used copperas as the additive to get black.  Fingers crossed it will work 10 years on too. Soda tends to rot wool so best to avoid this if possible.

The finished skeins - black. They really are black - difficult to get a black in the image, apologies I am just using my ipad for the photos! 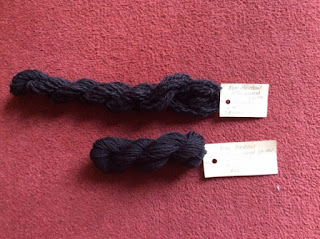 NB. Copperas is iron sulphate
Posted by imagejem at 09:40 2 comments: