Thurs 20 Sept
It was quite stormy first thing, but we had had a quiet night. There had been quite a bit of damage in mainland Scotland and other parts of the country as a result of the storm, or rather end of the hurricane that had affected the USA badly.  We knew some ‘wool weekers’ who were planning on coming up on the ferry last night  but couldn’t get from Edinburgh to Aberdeen. At first is was obstacles on the line, not leaves as often affects trains in Norfolk, but bigger items such as a shed! I felt that not being on the ferry last night was a blessing in disguise.
We were planning to have a quiet day as I was going to the Heritage Centre in the evening to show the ladies how I dye with madder. This will be interesting as the water will be very different from Norfolk. I believe our Norfolk water is the hardest, or some of the hardest in the country and partially the reason Norwich became famous for dyeing Norwich Red for the wonderful woven shawls in the 1700 - 1800 period.  Also I would frequently  use madder to modify a colour already obtained from a plant. However, the demonstration/ workshop will show my general method for using a powdered dye and also for modifying the colours after dyeing. I only had modifiers that I could get on the journey up too as we didn’t finalise the details until I was on the travelling north.  The weather for the evening was not looking promising so I wondered whether anyone would turn out.
We had a morning doing housekeeping including the laundry. We would be travelling down to Mainland first thing Saturday morning and once Wool Week had started we wouldn’t want to be bothered with any more domestic chores than necessary.
However, the thoughts of coffee at Victoria’s managed to prevent the housekeeping taking too long and once there we decided that lunch there too would be a great idea.
I was well prepared for the evening and had  handouts so we were keen to go back to Norwick, although it seemed a little too rough to drive further up to Skaw today.
Norwick  beach was a real delight again.  The storm had brought in more seaweed and turning this over were groups of birds along the shore. It was great to be in the van, it was rather breezy outside and watch them being quite systematic. We had great views of Turnstones, Sanderling and Ringed Plover with what appeared to be a Rock Pipit.  In the background were Fulmars finding their spot on the cliffs with ease and gulls accompanied by the wonderful precision fishing show the gannets provide. On top of this the colours in the seaweed were spectacular and would provide inspiration for fair isle designs throughout the year.

Seaweed full of rich pickings for the birds
After an early dinner we packed the car and set off for the Heritage Centre fully expecting, from the weather, it to be a small select group. As we got close we could see lots of lights and the car park was getting parked up. I didn’t get a chance to count the ladies during the evening but I know it was more than 12. We had a good evening as I demonstrated the best method I have got so far to get a good red  when dyeing with madder. Once we had the base colour the ladies were able to  take a more active part as we used the additives and by the end of the evening we had 4 tones from the original dye bath which in itself gave a good red. 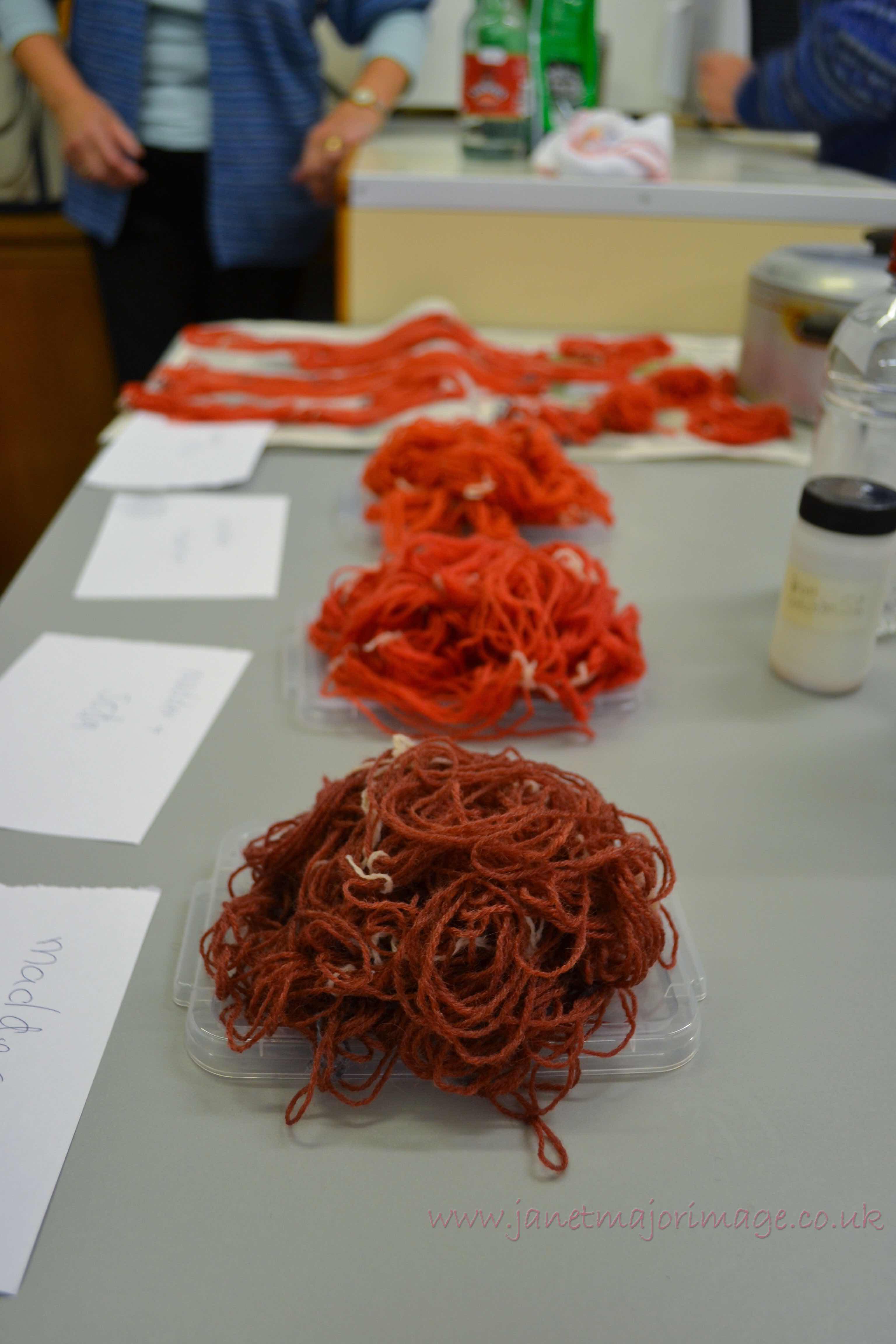 Our madder dyeing, the front yarn is with added iron which gave the most difference as expected.
As always, refreshments followed and from people’s faces, the questions and conversations a good time was had by all. It was good to talk to others who had also done some natural dyeing previously, by comparing experiences more is learnt.
Thoughts also turned to ‘if we can do this next year’ and what we might do.
As we got back to base the reflections in the Sound from the moon were stunning. It was not really dark. 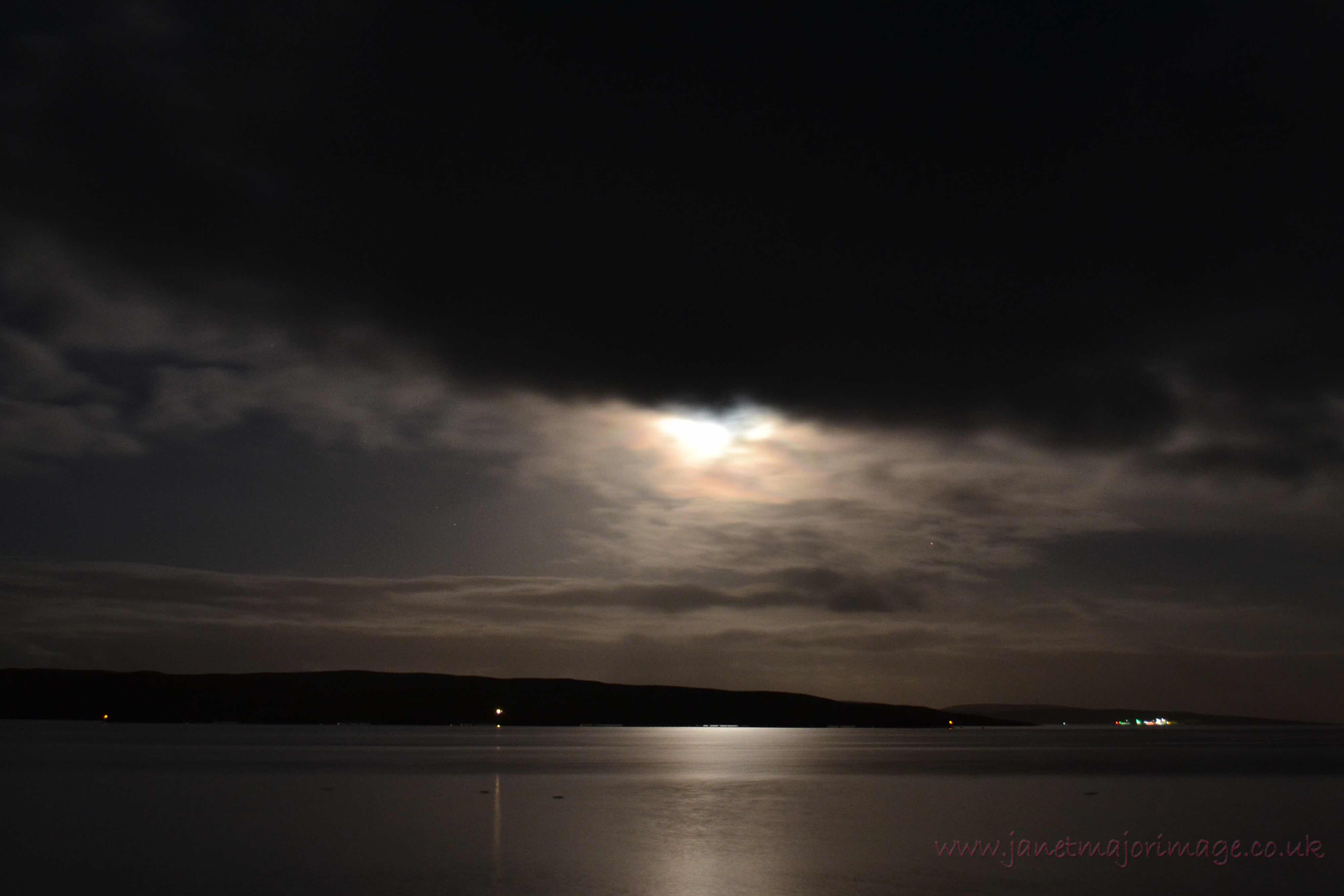 Across  the bay at 21.30
Another great day in this beautiful place.
Posted by imagejem at 09:55