This is about beginnings and endings! I initially planned to write a blog post a day during August about the different things I do – hence Creativity 1 – 31. It has taken me longer than a month – but hey never mind there had to be time for the actual creativity. I aim from now on to write one or two posts a week…  I never expected to write this post – and have abandoned what I intended to write about – as I have become interested in the past and finding out more about the local linen industry.

Since moving back to East Anglia I find myself next door but one to Flax Farm and 200 yards from us is an area which the map called Flaxlands. This is intriguing.
On discussing this with a member of the local History Society, I was told the flax was at one time grown and retted here and taken to the workhouse to be spun and there was a lot of flax.
So I was even more intrigued when an email dropped into my inbox saying that Rickinghall Further Education Group ( a village half a mile from me by quiet roads) was having a series of lectures on Looms, Linens, Woollens and Worsteds - a History of East Anglian Textiles. Unfortunately I missed the first two - due to being on holiday in Scotland so last week was my first attendance.
Wow, this was fascinating. It seems that mainly hemp was grown not Flax in South Norfolk and North Suffolk. Lots of references were made so I have lots of leads to find out more.
On a practical level I remember spinning flax - turned out it was 2004. So I have found the flax I spun from and the linen thread I spun. Much bleaching was needed - I boiled in soda , several times, to get this silken looking thread. 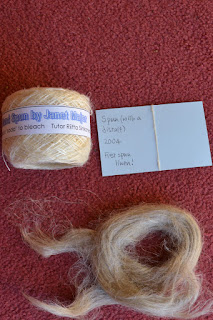 (The spun thread is about a mm diameter, quite thick for me!)


I was very lucky to be able to attend a workshop by Riitta Sinkonen-Davies who was a great patient tutor. She was chosen to weave the Rochet Rowan Williams wore at his inauguration as Archbishop of Canterbury.
I remember it was not easy to spin - mainly because I wanted it fine I guessed. It involved a distaff and a bowl of water on my lap.


I also found out examples of hemp and flax both in the natural 'yarn' state and bleached. The hemp is more 'rustic'. The joys of having a good stash! 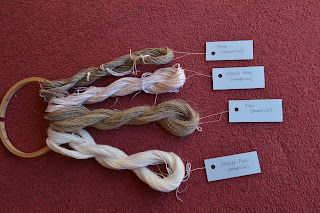 Needles to say I have more flax to spin and am going to have another go. But not in public in the class! Spinning flax needs concentration and no audience for the first few hours if I remember correctly.