We woke up to a very mild morning and the sea was flat calm with hardly any movement- what a difference 24 hours can make! As always we were very sorry to be leaving Unst but we were also looking forward to seeing wool weeker friends and soaking up the general atmosphere of wool week. We had decided  not to take the earlier ferry but to have a leisurely start and could have coffee before we left. We did some sums and made a plan for the day taking in some things I ‘needed’  to do in Lerwick before we drove south to our stop for the next 10 nights. Once we reached mainland we decided we needed more tea and cake, and enjoyed some lovely ginger cake we had saved from the Final Check out.

We were travelling leisurely and were quite surprised how much fog there was on mainland. We should have stopped and I should have got the camera out but there were lots of ‘must dos’ on my list so reluctantly I left photography for another day.

It began to look sensible to stop at the Bod first which would open at 12.00. Last year I had bought a super set of dpns needle ends, made by Brita’s husband.(1) I had contacted them some weeks ago and they had kindly offered to reserve another set.  Brita knew all about these and produced  the set. I love these too, so now have a set for my fair isle knitting and a set for my lace knitting. It is so lovely to have Shetland thoughts when I get my knitting out during the whole year. 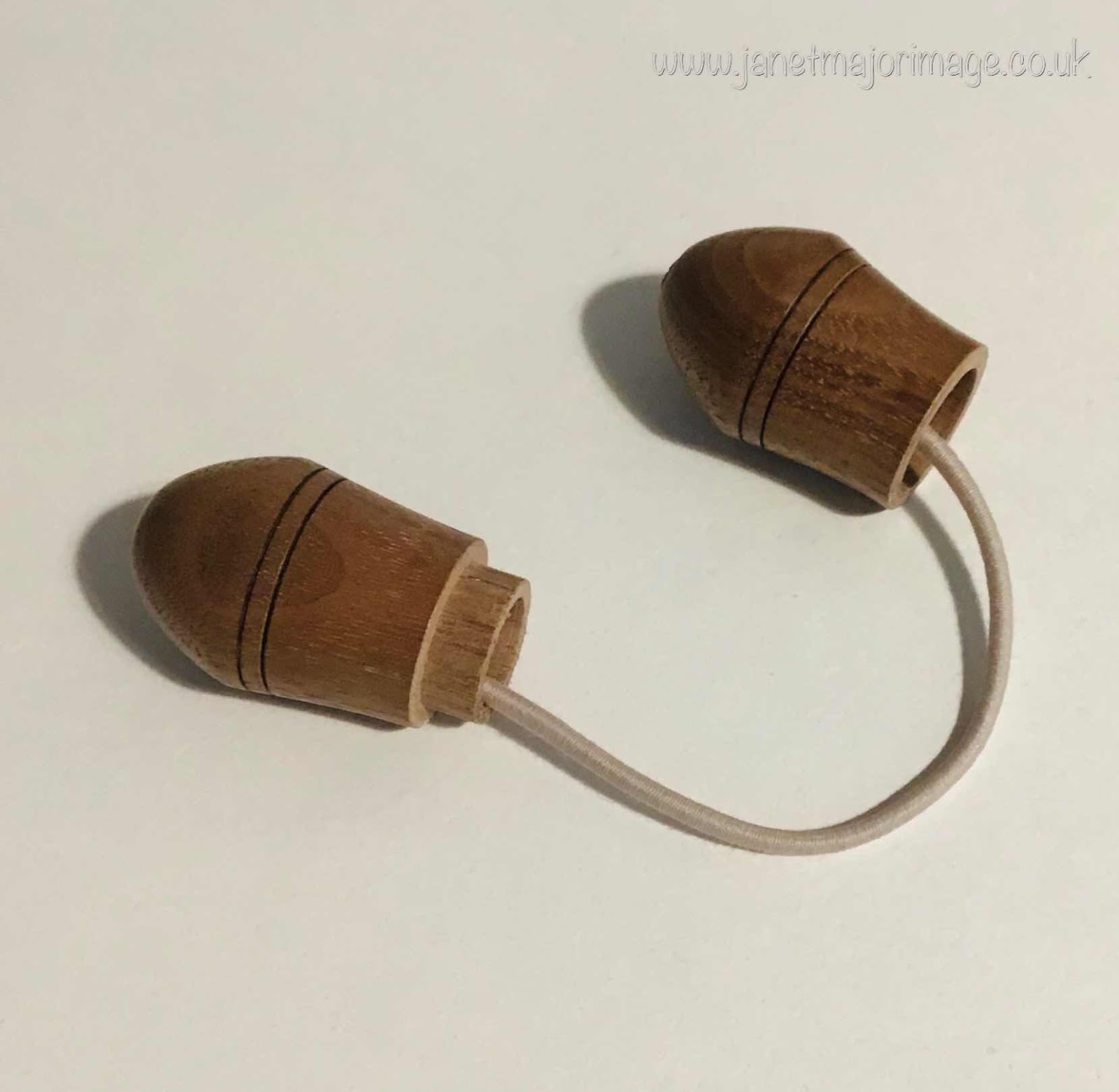 Next stop was Jamieson and Smiths and some cones of natural yarn  to buy before the shop got super busy in the week. This means that  once the weather obliges in the New Year natural dyeing will not have to wait for the postman to arrive.

Next stop was the Hub. From posts on the Wool Week page prior to leaving home  it seemed this year as if there were likely to be more than the 600 or so people that  attended in 2018. I was amazed at how many people were queueing to pay in the Museum Shop and thought this suggestion would be true. Little did I know then when the numbers were calculated for 2019 that 1000 would be the number estimated for attendees. (2) I collected my SWW annual from the hub and was very pleased with it. It is such a great publication each year and is a physically nice annual to have and as always there was more in it than just the knitting patterns. However, the knitting patterns themselves are excellent. I had seen Hazel’s Hoosiefield gloves before I left home and decided to take some wool with me so I could get started once I got the annual. What was nice was that in the hub there was an example of each of the items knitted from the patterns in the annual and these were very nicely presented. There are several that I would like to knit. 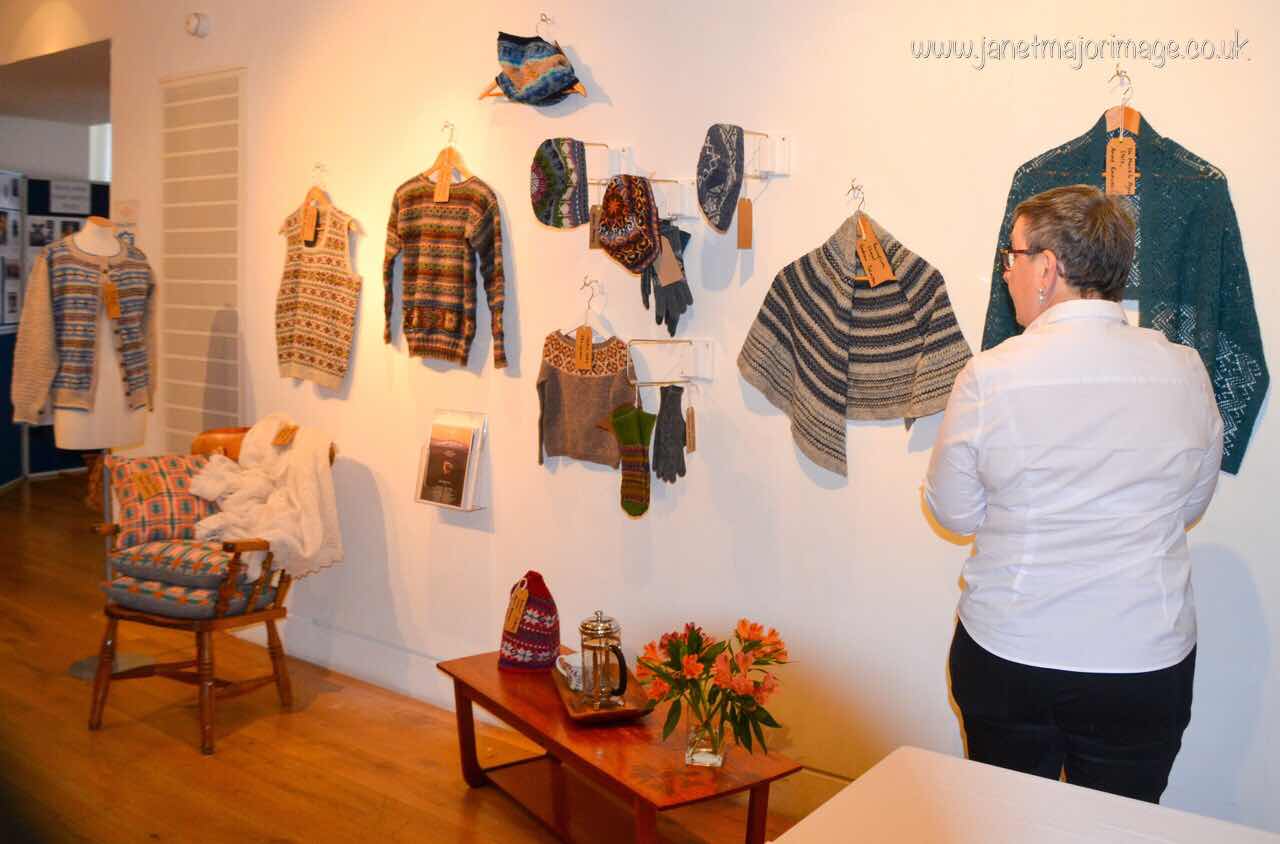 We popped upstairs to look at the new cafe (3). It was good to see that it was busy and we noticed that some of the tables were reserved and knew that we would be having coffee there later in the week.

Next stop was Tesco, we were able to get an organic chicken and some other provisions so would be set up for the start of the week. The shop was busy, it looked like with local families doing their shopping. I don’t think I had ever seen it that  busy.

I was keen that we got the shopping done as quickly as possible as I wanted to visit Sally Ead (4) and her pop up shop on Commercial Road. I had been in touch with her before either of us set out as I saw that she was bringing some knitting sticks with her. Knitting sticks appear to have been used in East Anglia and much of England to serve the same function as the knitting belt in Shetland. I was hoping to buy one. It was just like being in a sweet shop, there were some beautiful linen smocks, sheets of linen and hemp, some knitting sticks and rag books made of hemp. I was particularly interested in items made from linen and hemp (5). I was so delighted to be able to chose  one of the knitting sticks and also treated myself to a small rag book with hemp pages.

I hoped to return later in the  week to look more seriously at the hemp sheets. 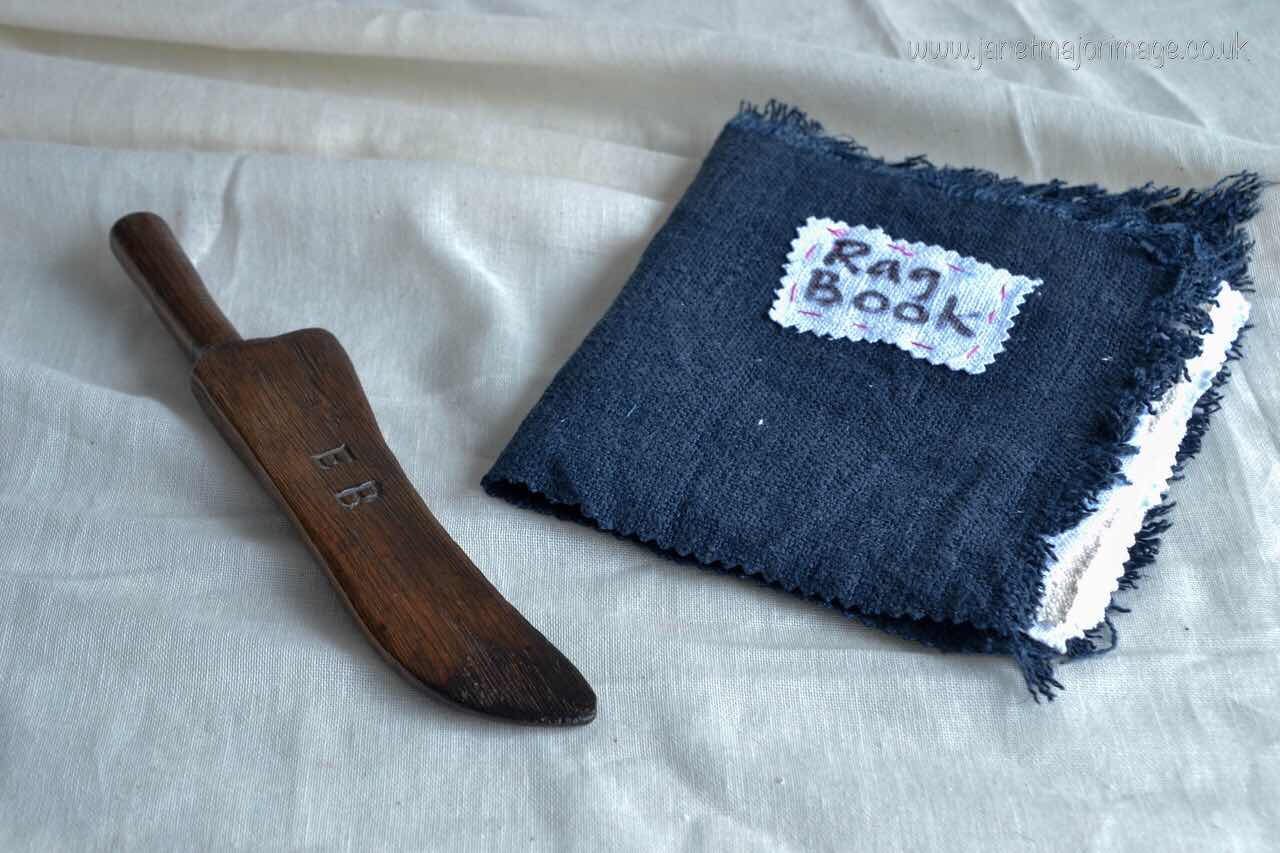 We then drove on to our campsite, where we would stay for the next 10 days. We were surprised that there were 3 caravans with families and their children. Usually the only campers are there for Wool Week.

Kate arrived back from her trip to Ollaberry so had much to report about the haps and the fine lace spinning that was taking place. I was planning to visit on Tuesday and was very excited by the thoughts of this.

We made a quick dinner as the day was not over yet. We were off back into town and to meet up with other members of Terri Malcomson’s Creative Crew fb Group who were coming to SWW.  This year we were meeting in Havly Cafe. We got a drink and some excellent cake and then caught up with old friends and newcomers to wool week.

What a great start this had been to Wool Week. I was glad we were having rather a rest day on Sunday as I wouldn’t be able to take this pace all week.