Shetland Wool Week 19:5 Checking up on Unst after a year’s absence

It was a grey morning but we were very snug due to the  van’s central heating.(1)

Today we planned to visit some of the shops in Unst. Given that the population in the 2011 Census was 632 there is a good range of shops.

Henderson’s - probably the largest and more varied of the three general shops, selling nearly anything we have ever wanted.

(There is another great store and cafe - The Final Checkout - which is also a petrol station and where last year I bought sandpaper needed for my spinning wheel! ( Discussion of visiting this later along with the other ‘shops’ in Unst).

We would also visit the Heritage Centre which has a shop related to items in the Museum.

I also had a plan to take a photo of my Dunella Shawl (post of 14April19) through  a window of an abandoned croft. However the shawl is very fine weighing just over 25g and today the wind, although light by Shetland comparisons, would be too much and blow the shawl horizontal. However I had a fallback plan for this photography too.

The day started with a wonderful surprise, I was now the proud and very grateful owner of an Unst Shetland fleece. I was over the moon. I am going to knit a wool week 19 hat for the donor of this. However, from my previous ‘knitting a hat for another person’ I was definitely going to get the head measurement first. (Post of 29May19). M provided his hat, to be tried on, and I feel confident I can knit one now to fit.

M’s INR was not stable when we left home so we needed to go to the Health Centre to arrange a blood test.(2) This involved registering as a temporary resident and making an appointment. He noted the ease of doing this and the fact that the waiting room was empty, unlike at home.

Next it was on to Henderson’s, which is a great shop, and a real joy to spend time looking around. Besides the fan heater, for which we had a choice of two, we bought a couple of sharp knives, we seem to need 4 when we are away  and only had 2 with us,  and a lovely little bamboo and silicon spatula for getting the last bit of froth from the coffee machine froth maker. Then to Skiboul Stores where we got a homemade pie for lunch.

Next we drove up to Haroldswick and could not go through the village without going into the Heritage Centre. I bought a great locally authored booklet on the History of Unst, looked at the patterns which were newly available so I could decide which I would buy. 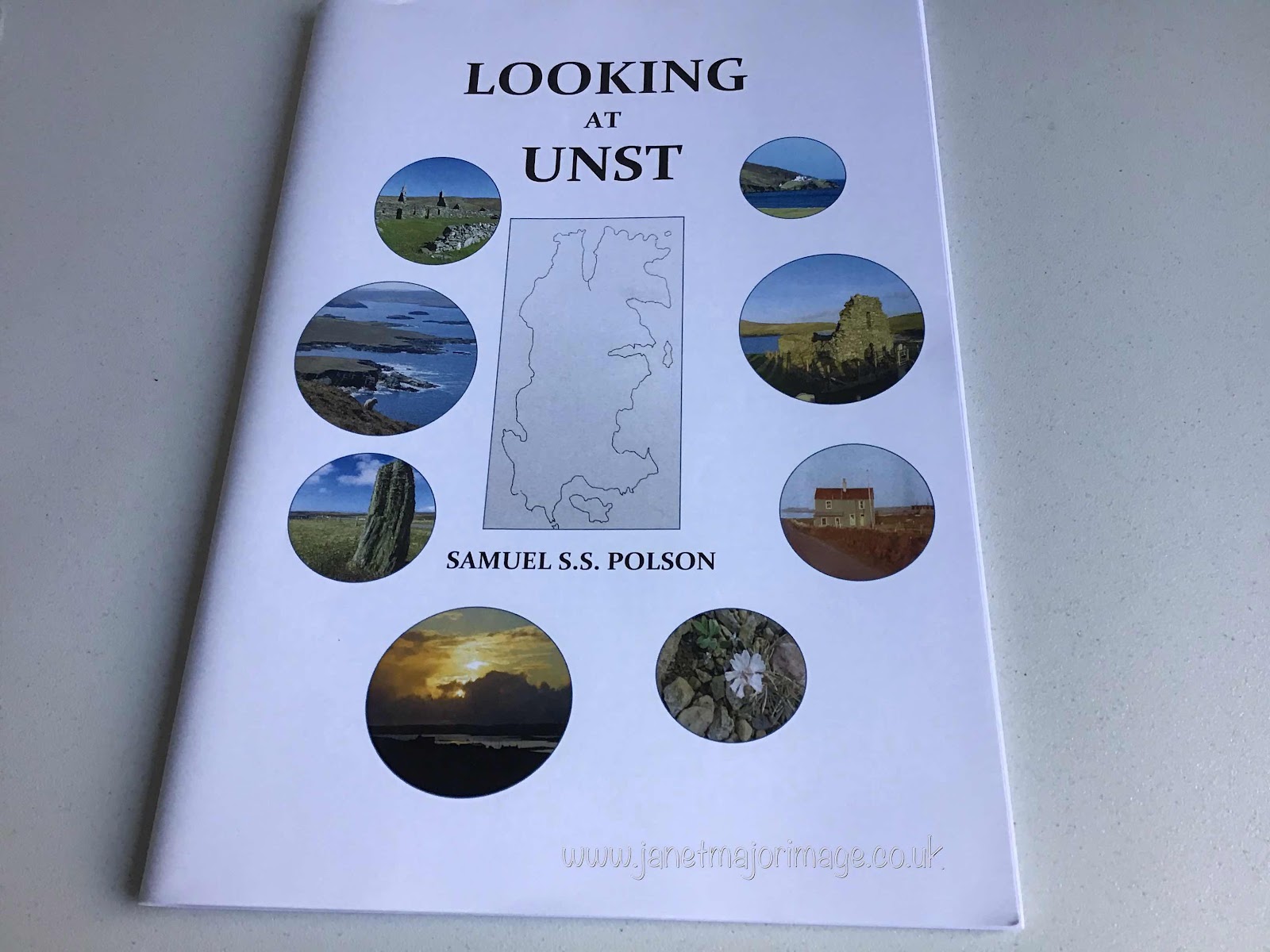 I was pleased to see Frances so we could chat about what had happened to us both during the year. I was very glad to hear that  the Heritage Centre had been very busy. It is hard work for the small band of volunteers that keep it going. They were trying to build up energy for the numbers that they knew would come up during wool week.

Norwick beach, one of our favourites was designated lunch spot . 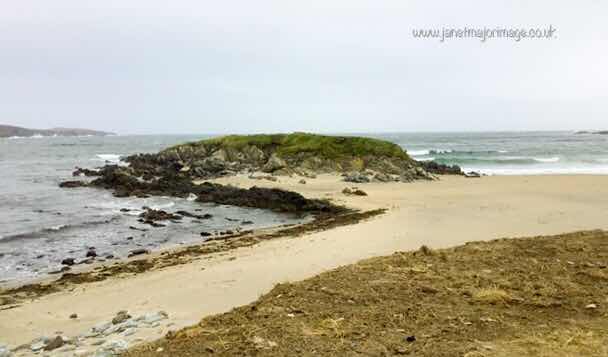 Before we left home I looked in Sarah Don’s book, ‘The Art of Shetland Lace’ which I have had for an age. As I look at more lace I see more and more. I liked some of the ‘patterns’ as they would be called in Shetland, but I am more likely to call them motifs. I decide it would be a good discipline if I turned the text of of how she describes them into charts. I had brought plenty of graph paper with me for the job and this afternoon sitting with a cup of tea in the snug of the van seemed like a very good place to get started on it. I knew I was going to get my knitting fix later. I did not finish but had made a good start and could already see how much help this was being to me.

Stage one of charting a tree and wave 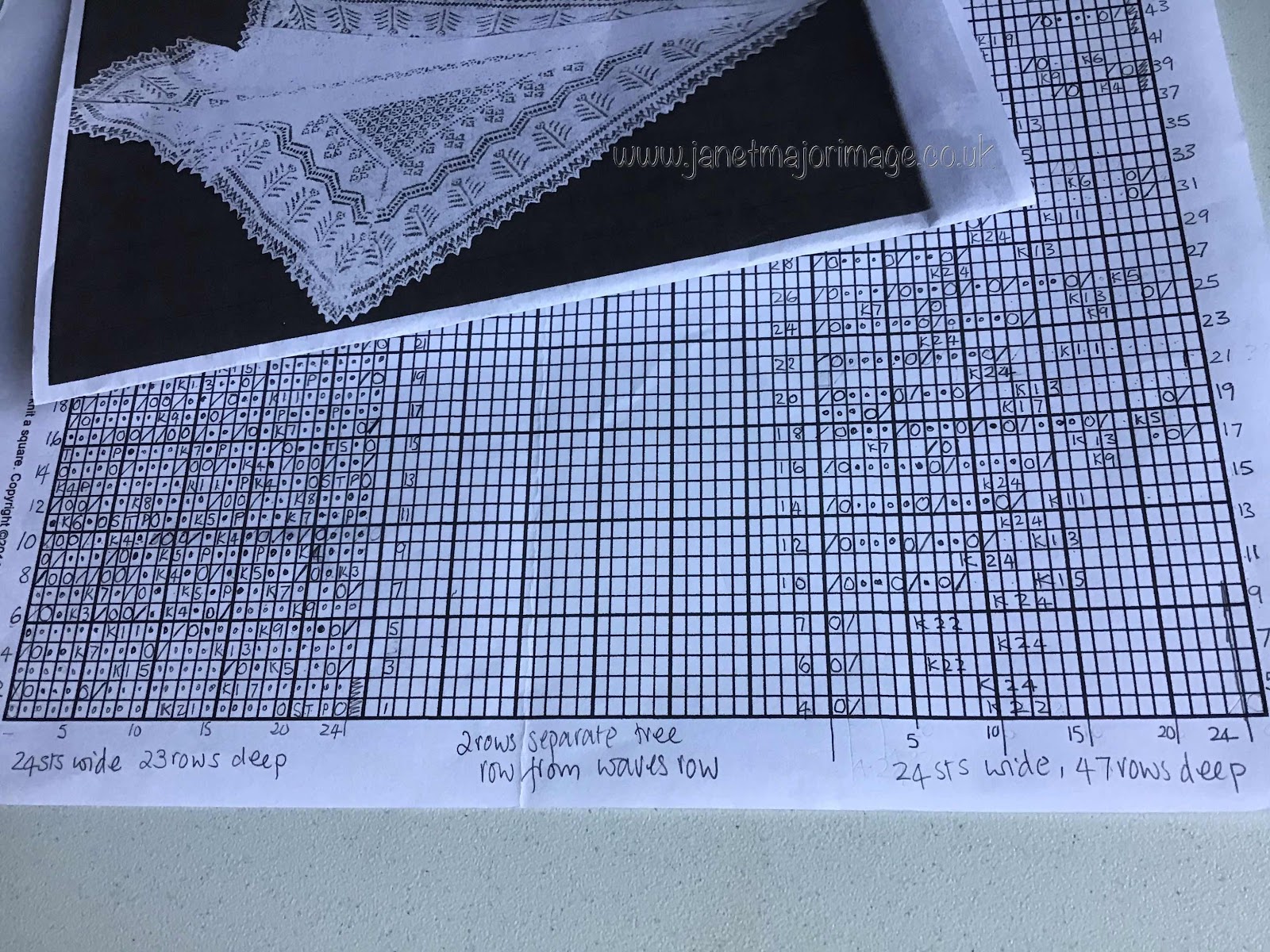 M walked up the road away from the beach to Valyie, one of his favourite  birdwatching spots in Unst.

After an early dinner I was in for a lovely treat. I had been invited to the knitting group that meets at the Youth Hostel on Monday evenings.  I took my sample lace shawl. I had knitted the lace edging and had picked up stitches and knitted one of the wedges which I worked out had to have loops on both ends of the wedge. I would attempt to knit and join on the second wedge during the evening. It was rather a silly thought as it needed full concentration and although there were brief periods of silence, there was knitting chat too. It was lovely to meet the ladies again and talk about their latest and current knitting. One lady was also a machine knitter but always hand knitted her Fair isle yokes. This is my feeling too, I can’t imagine wanting too, or actually knitting the yoke on the machine- who wants seams in a yoke?

The Youth Hostel works on a tight budget, so does the Community Hall at Uyeasound and from the meeting I understood that voluntary organisations were able to bid for a grant and that the whole community were invited to a meeting the Thursday of Wool Week to vote for who was to get the money. I was happy to write a couple of lines about why I thought the Youth Hostel was a deserving case (3)

I did manage to do a couple of the wedges with the joining on but I wasn’t really liking the look of this method much in this yarn with this pattern but I would finish it.

We live, at home, in an area where we have no street lights but as I sat there I realised I had to negotiate going across the lawn and finding the correct place to step down to reach the van afterwards. What a relief to see DH waiting for  for me with a torch when I tore myself away from the knitting.