Buying knitwear is not something I do often as I prefer to make my own, either knitting by hand or machine, that  way I know it will fit and I won’t see anyone else wearing an identical or even similar item. I like  to hand knit only those textures that I can’t do with the knitting machine.

So to actually buy knitwear it has to be special and a couple of pieces took my eye last year. However, I have never found the right time to wear either and when I tried them on I recently I decided both were buying mistakes. One was rather like a poncho, I did wear it out to dinner one evening and got more and more frustrated. To me arms have sleeves for a reason, they are warmer in sleeves and basically it is easier to eat wearing sleeves than having them covered underneath a cape like structure. I decided this would be one of my items I donate to charity for my lent contribution (1).

However, this has been a valuable experience and I thought more carefully about what I do like as an outer wrap around. I have 2 Liberty large square challis Shawls woven in wool and of the 60s/70s that I love and find both warm and functional. My other shawls  are knitted wool and I love those too. They are fine lace but very versatile, being useful in winter and summer.

However, I decided to knit a thicker rectangular shawl - this would serve three functions:

Use up some of my store of red yarns, I have several fancy ones that I have been tempted to buy but not found the right item for them

Produce a thicker shawl that could be thrown around the shoulders as I wished and be more of an outer garment.

I worked out a suitable size and collected the yarns together. I had seen a pattern for a Sampler Shawl, I think on Ravelry and had downloaded the free pattern. (3) I tried to find the tension used so that I could work out if my yarns needed doubling or knitting treble. I looked up the yarn used, which turned out to be a variegated yarn. I was going to put together my, mainly, single colour yarns in I hoped a pleasing sequence.

The pattern did not include the tension and the shawl was knit with 6mm needles. These seemed huge to me, my last knit item was a 1 ply shawl using 2.5mm needles. I tried to work backwards from the size given for the shawl with the row and stitch count but that did not prove useful either. I tried my yarns with the 6 mm needles and did not like the effect I was getting and did more sample pieces, finally deciding to use 5.5mm needles and doubling up my predominately  Shetland 2 ply  as 4 ply yarn as needed. I had a little moan to myself(4) and then decided to embrace the enforced creativity. After all this was a free pattern, it had given me some ideas to get going. So I worked a tension piece and this enabled me to get a size I was happy with for a shawl. I wanted it to be wider than the 12” the pattern suggested.

I gathered together my yarns, many I had dyed, several hand spun too, fancy yarns and lots of Shetland yarn from Jamieson and Jamieson and Smiths. The yarns all had a warm undertone and several of the red I had were clearly not suitable for inclusion to my eye. 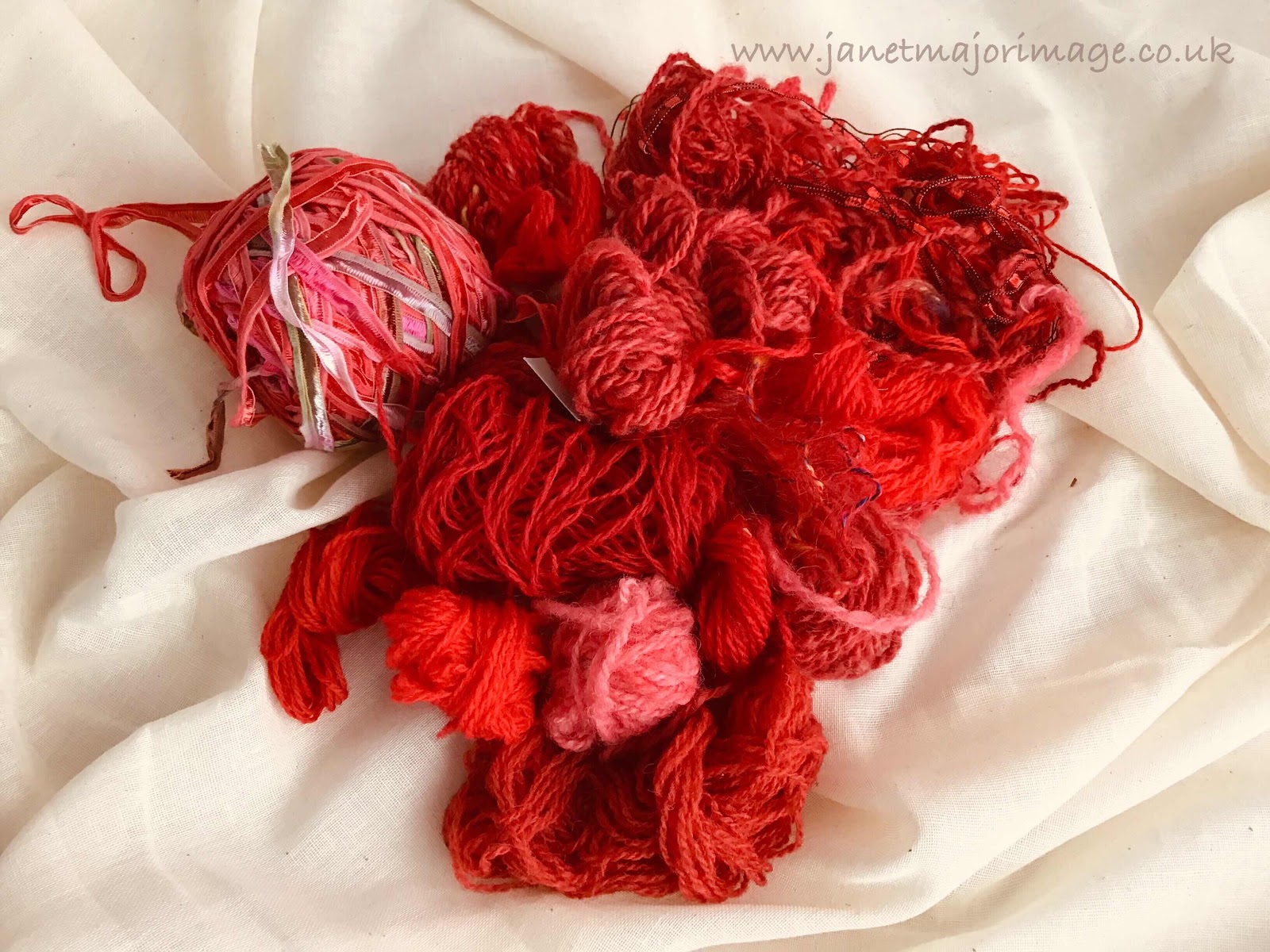 After the first inch or so it was clear I needed more yarn, but this provided a conundrum as I was trying to use up yarn not buy more. I ordered some by mail order using a shade card, but each of the three I had chosen were not suitable for this project to my supercritical eyes. Hence why I decided I would make my own yarn, based on Merino  tops. If I wasn’t going to diminish my yarn stock I could use up some of the Merino tops that I had had for felt making  when I did more of this. This would give me the change to blend in colours that would suit the warm tones of the bought yarns and also I could incorporate some of my hand dyed fleece. This hand dyed fleece was mainly naturally dyed but there were some acid dyed reds.

Carding for the ‘designer yarn’ 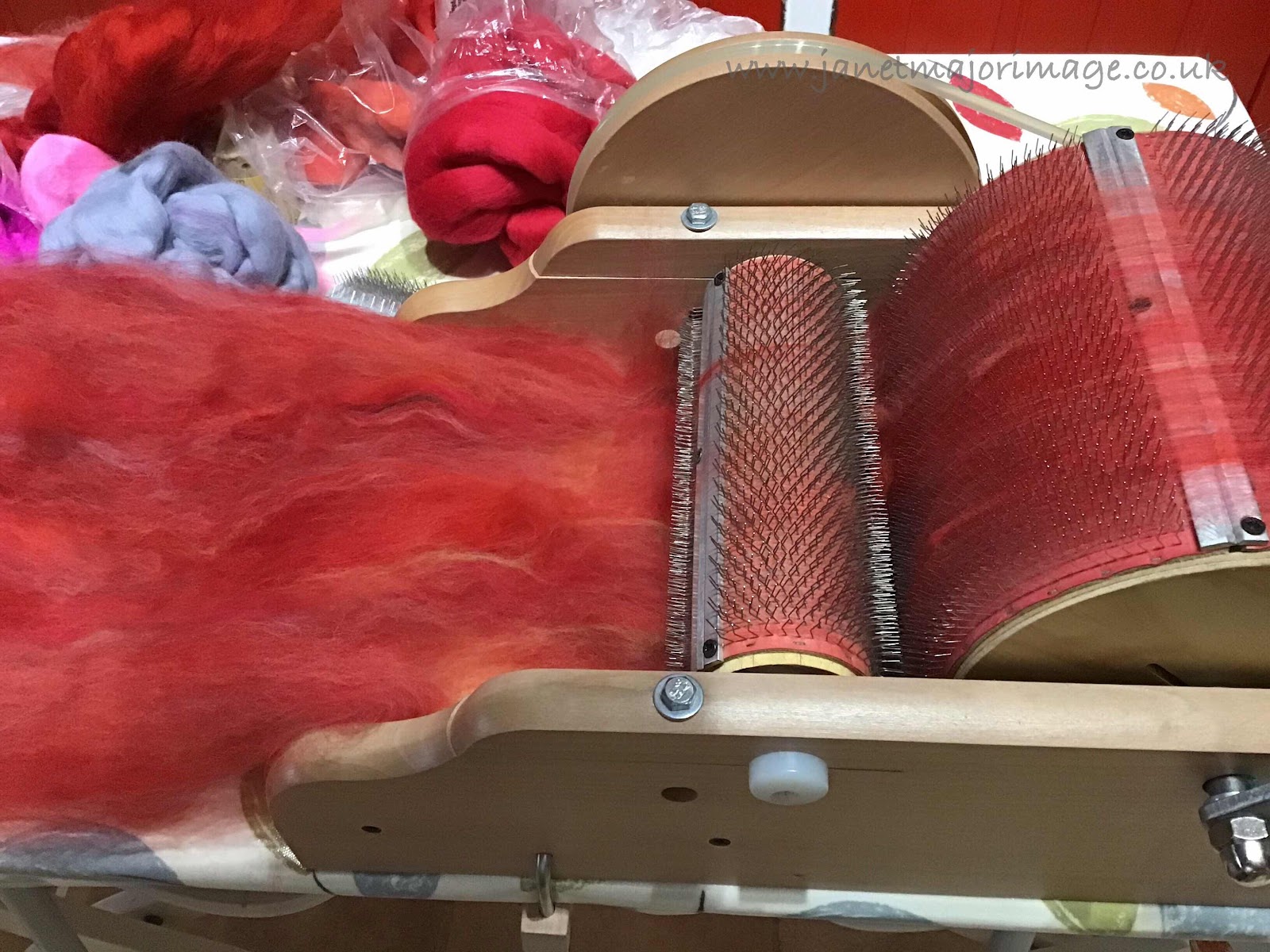 I also had some Colinette  yarn. Some years ago I was attracted to this, such as at early Woolfest events. However, I have never found a much use for it and I was very much hoping to incorporate some into this shawl. I found it too heavy to knit with and that the colours in the variations always contained at least one that I did not like when I started using it. So after much preparation I had enough yarn made to, I hoped, complete the shawl.

The main yarn would be Shetland, there would also be merino, North Ronaldsay, mohair and some unknowns.

I had to make a compromise that I was not happy with. The yarn was quite bulky and I needed a lot of stitches per row. So reluctantly I gave in and used a circular needle, when I would have much preferred to use double pointed needles and a knitting belt.

The pattern is mainly In garter stitch , although some rows were in stocking stitch. This meant I would be careful on which rows I changed the yarns and the shawl would, to me at least, have a public and private side.

In fact I misjudged just how much yarn was needed and in all it took 300g. This meany I had to have another designing yarn session, involving finding more suitable tops and fleece and more spinning during the project. This is very unlike me as I like to have everything prepared before the start.

I quite enjoyed the knitting, but not using a circular needle. However when finished I did not like the shawl at all. I decided it was too thick and I would finish it and donate it to a good cause.

HoweverI carried on finishing it properly, washing and then blocking the shawl on my large board. I decided I was a fine yarn person and I would just have to not waste my time on this sort of idea again.

But I was in for a nice surprise, once I unblocked it, it felt much better and I actually fell in love with it. It is a unique item, and most of the yarns have a story behind them. The whole shawl is a reminder I see from my house at certain times of the year. It has turned out to be a talking point when I have worn it out.

I am now deciding whether I ought to knit another in blue possibly or purple. 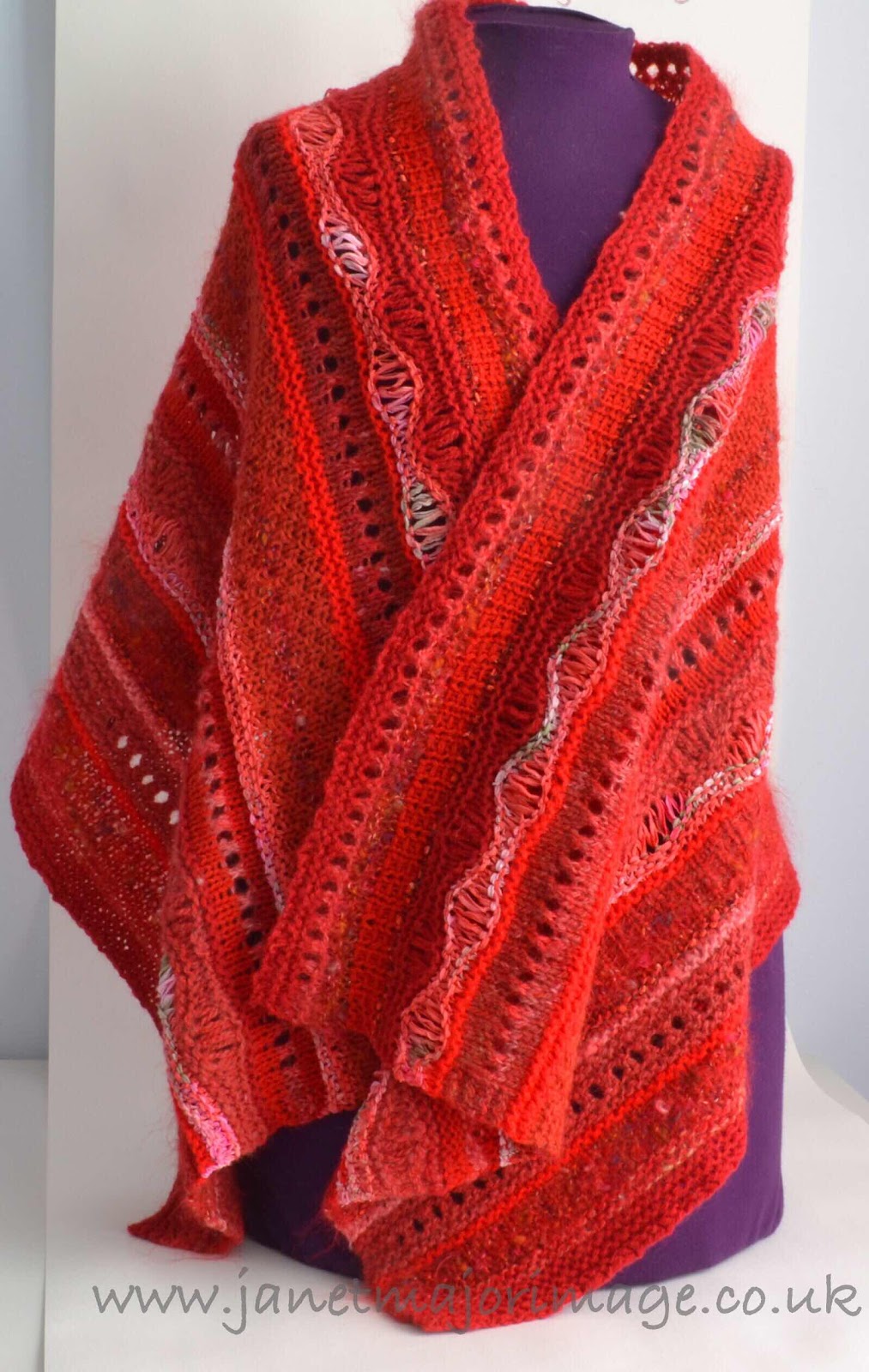